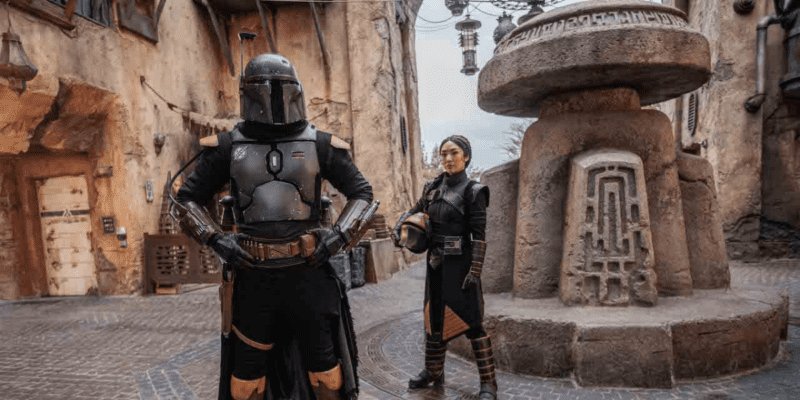 Fans of the Star Wars franchise will soon have more reasons to visit Disneyland Resort, as new characters will soon be making their debut at Galaxy’s Edge.

Starting tomorrow, May 28th, Guests will finally be able to meet the legendary bounty hunter Boba Fett (Temuera Morrison) and mercenary Fennec Shand (Ming-Na Wen) as they stake a claim in Star Wars: Galaxy’s Edge at Disneyland Park. Din Djarin (Pedro Pascal), known as the Mandalorian, and Grogu, the child who found protection with Mando, will also journey to Star Wars: Galaxy’s Edge at Disneyland Park at a later date.

Guests had begged Disney to add different characters from the Star Wars universe since Black Spire Outpost opened in 2019. However, this had not been achieved due to the strict place in the timeline in which Star Wars: Galaxy’s Edge exists.

However, the Disney Parks Blog shared this exciting announcement stating the following:

Since Star Wars: Galaxy’s Edge opened in 2019, Star Wars storytelling has experienced a galactic expansion to include many new characters and stories across a wide range of settings. Now, Star Wars: Galaxy’s Edge is likewise expanding the stories guests can encounter when visiting. Having been designed from the outset to connect with a broad range of Star Wars storytelling, Black Spire Outpost has played a role in many of these stories stretching over thousands of years and while, up to now, we have mostly shared those story connections through media and publishing, we will soon give visitors to Batuu an opportunity to connect with those fan-favorite stories with the immersive detail and authenticity that Star Wars: Galaxy’s Edge was designed to deliver.

This opens a whole galaxy of possibilities, as Guests will be able to meet and interact with different characters from the ever-expanding Star Wars universe. However, the Disney Parks Blog stated the following:

While we as visitors may be able to experience different stories throughout Star Wars history, the characters on Batuu can not. They will remain in their specific story and timeline and won’t intersect with other characters or stories that would not be appropriate for them.

This means that, while Guests will be able to encounter Boba Fett, Fennec Shand, Din Djarin, and perhaps more characters in time, they will not know who Rey or Kylo Ren are, and vice versa, making the immersive experience adequate to the timeline of each group of characters.

The announcement came from the Star Wars Celebration in Anaheim, where Imagineers and Lucasfilm creatives held a panel called “From a Galaxy Far, Far Away to a Disney Park Near You.”

While Darth Vader, Boba Fett, and Darth Maul have previously made appearances at Disney Parks, it is true that since the closure of Star Wars Launch Bay, both at Tomorrowland in Disneyland Park and Disney’s Hollywood Studios in Walt Disney World Resort, these characters have not been seen as often as Guests would like.

We previously reported on reactions from Guests regarding the frequent arrival of new characters from the Marvel Cinematic Universe to Avengers Campus at Disney California Adventure and how they demanded more Star Wars characters needed be added to the Parks. At that moment, this was impossible due to the strict and elaborated timeline crafted for years specifically for Black Spire Outpost. However, with this new announcement, Guests will finally be able to join different characters from the Star Wars universe on their adventures.

Are you excited to meet Boba Fett, Fennec Shand, The Mandalorian, and Grogu at Star Wars: Galaxy’s Edge in Disneyland Resort? Let us know in the comments below!