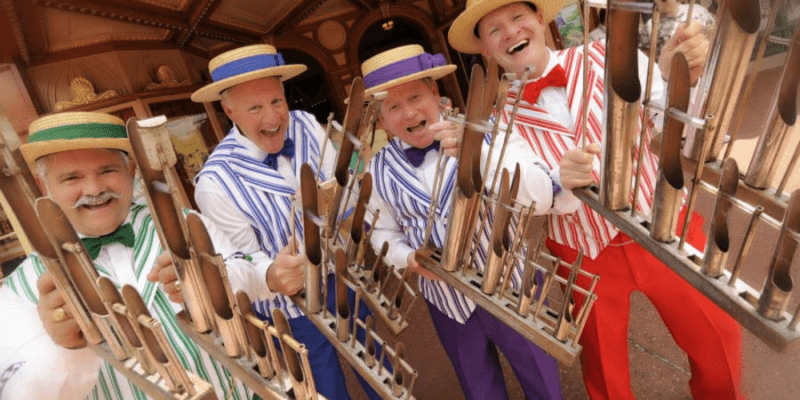 On this day nearly 50 years ago, the original Dapper Dans performed their first set at Walt Disney World’s Magic Kingdom. In celebration of the Dapper Dans, let’s take a closer look at their history and legacy!

The Original Magic Kingdom Dapper Dan’s performed their first set at the GAF Photo Shop during a Cast Member Preview on this day in 1971. #disney #dapperdans #disneyworld #disneyhistory #magickingdom pic.twitter.com/xbycZU9BFU

Everyone loves the Dapper Dans. No matter your age, their ragtime tunes and takes on classic Disney songs make your feet move, and fingers wiggle!

Beginning in 1957, the Dapper Dans called Main Street USA their home at Disneyland when entertainment director Tommy Walker formed a barbershop quartet to help transport guests back to the turn of the century town.

Since then, the Dapper Dans have made their home at Walt Disney World’s Magic Kingdom and Hong Kong Disneyland.

At Disneyland, while their mainly found in front of Walt Disney’s fire station (next to the Emporium), the Dapper Dans love playing musical-chairs with Alice and the Mad Hatter in front of the Coke Corner, and march down Main Street, U.S.A. with Mickey Mouse and all his pals.

The Dans usually perform as a quartet, but there are twelve singers at each park that pop in and out around Main Street USA throughout the day.

Throughout their lifetime, the Dapper Dans have become even more dapper with new costumes and a four-person bicycle they use to cruise up and down Main Street USA.

In a bad mood at the Magic Kingdom? Take a few minutes to listen to the hilarious Dans that can turn your frown upside down. They’ll pick up their Deagan Organ Chimes to help spread a little magic.

In the morning, they cruise down Main Street USA on a horse-drawn trolley at Walt Disney World’s Magic Kingdom, and by 5 p.m., the Dans join in with the Main Street Philharmonic for the nightly Flag Retreat Ceremony.

Each Halloween season, the Dapper Dans transform into the Cadaver Dans (boo!). You can find these spooky singers come out to socialize and sing fan-favorite Halloween songs like “Grim Grinning Ghosts” and “This is Halloween.”

In response to the recent Disney Parks closures, the Dapper Dans have continued singing through virtual #VoicesFromHome performances on social media.

We can’t wait to sing along with the Dapper Dans again and create more memories!

Do you love the Dapper Dans? What’s your favorite song they sing? Let us know in the comments below!