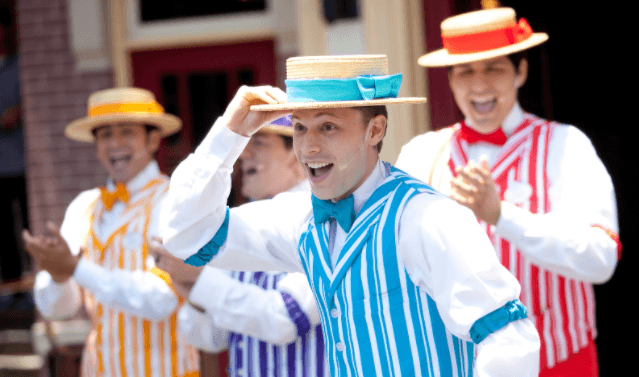 The original Dapper Dans of the Disney Parks are set to make an emotional, triumphant return very soon. Here are all the details!

The Dapper Dans have been performing at Disneyland Park since 1959, and for decades they have enchanted Guests with their iconic tunes. Each Dapper Dan brings charm and Disney magic to their Main Street performances, something Disney fans look forward to with every visit. But when Disneyland Resort first reopened its theme park gates amid the pandemic on April 30, 2021, the Dapper Dans were among a variety of entertainment offerings that had been suspended.

Well, the wait for the return of the Dapper Dans is nearly over! After such a long time without seeing this Disney quartet performing at the original Magic Kingdom, we officially know when the Dapper Dans are making their comeback.

Local newspaper The Orange County Register has reported that the Dapper Dans will resume their performances on Main Street, U.S.A., on Friday, September 3, which also happens to be the first official day of the Halloween Time season at Disneyland and Disney California Adventure. There are 12 Dapper Dans of Disneyland, and, according to the OCR, their rehearsals have been joyous and emotional. We can’t wait to see them perform at The Happiest Place on Earth for the first time in forever!

The return of the Dapper Dans is another phase in the reopening of Disneyland Resort amid the ongoing pandemic. This musical quartet is the next entertainment offering to return, following live performances by the Five & Dime on Buena Vista Street in Disney California Adventure, the Disneyland Band in Disneyland, and occasional character cavalcades featuring Mickey Mouse that occur throughout the day in both theme parks.

Fireworks also returned on July 4, though other nighttime entertainment (such as World of Color, nighttime parades like Paint the Night, and Fantasmic!) has not yet returned. However, a special Halloween parade will be running at Oogie Boogie Bash in DCA on event nights, so Guests with event tickets can get excited for that!

Are you excited for the Dapper Dans to make their triumphant return to Main Street, U.S.A., in Disneyland? Let us know in the comments!