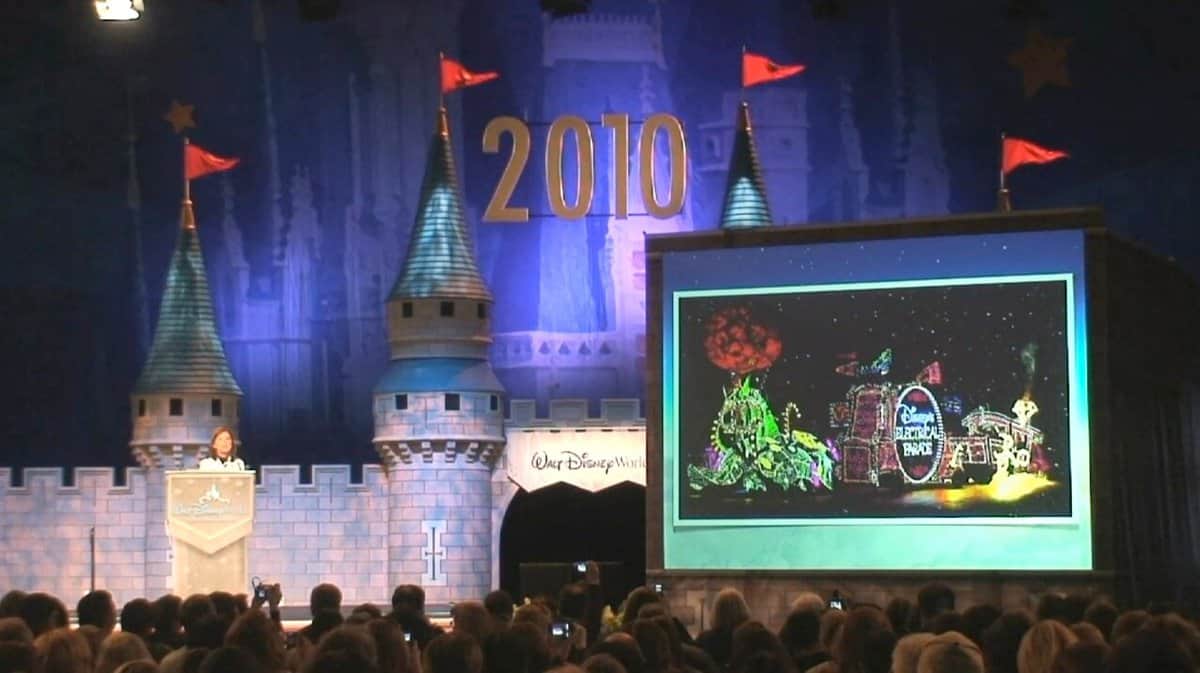 I remember the last time I saw the Main Street Electrical Parade actually ON Main Street at the Magic Kingdom. It was announced that on April 1, 2001, the popular nighttime Disney parade would be finishing its run at Walt Disney World.

Now, at the time, I didn’t realize that Disney parades hopped coasts and came and went every few years. I wasn’t frequenting Disney fan web sites to find out all the latest news as I do today. And there were no podcasts to deliver the news either. So I was under the impression that when Disney was giving the Electrical Parade a farewell, they meant for good.

I made sure to not miss it, so I made one last trip to the Magic Kingdom to see it before it went away. This was before I moved to Orlando, so it was a great vacation and a chance to see my favorite parade one last time.

Of course, since then, I have seen the Electrical Parade at Disney’s California Adventure in Anaheim many times, but it’s just not the same as seeing it on Main Street. So I was thrilled to hear the announcement last night at the “What’s New, What’s Next” media presentation that the Main Street Electrical Parade would, indeed, be returning to Orlando and will be shown nightly on Main Street throughout the summer of 2010.

In addition, Disney announced that an all-new fireworks show would be performed each night throughout the summer, as part of their new Walt Disney World Summer Nightastic, a name borrowed from last summer’s event at Disneyland in California. Disney also hinted at new effects and enhancements being added to the Twilight Zone Tower of Terror, one of my favorite rides.

Here’s a video of the announcement and an interview with Walt Disney World Marketing Director Carrie Matson:

While at the media presentation, I also had a chance to speak with Walt Disney Imagineer Diego Parras about the now-ongoing Fantasyland expansion at the Magic Kingdom:

There’s plenty of excitement to be found at the Magic Kingdom in the coming months/years and I can only imagine that this is all part of Disney’s plan to drive at least *some* attention away from the Wizarding World of Harry Potter opening in a couple of months at the Universal Orlando Resort. I doubt any Potter fans will pass up the Wizarding World to see the Electrical Parade and a new fireworks show, but they will almost certainly now add a visit to the Magic Kingdom into their vacation plans.