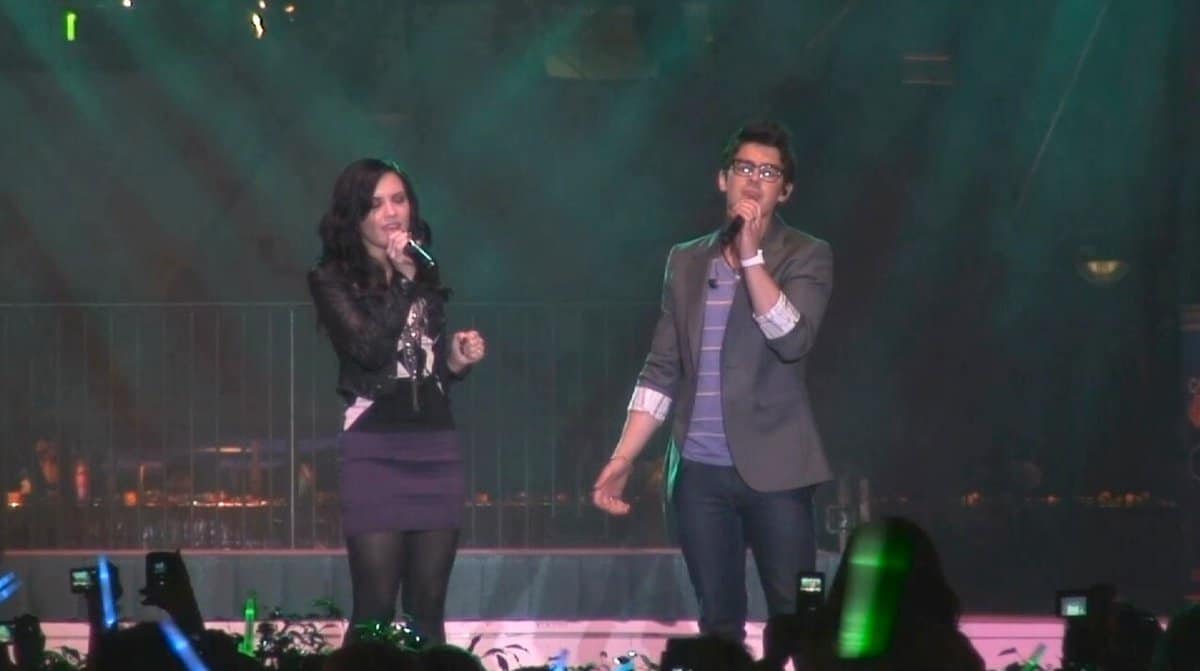 Last night at Epcot was a continuation of a two-day Disney media event surrounding their ongoing 2010 promotion, “Give a Day, Get a Disney Day.” Day one was at the newly-renamed ESPN Wide World of Sports and brought several exciting announcements for the upcoming summer season.

During the day yesterday, a few events were held at Epcot, including the unveiling of a world record-breaking sculpture of canned goods and appearances by Kermit the Frog and Ty Pennington. But unfortunately, I wasn’t there to see any of that until late in the afternoon, as it was a rather busy day at Lanyard Lab (which is a good thing).

Prior to arriving at Epcot, I followed the day’s actions on Twitter (using @attractions, @ThemeParks, and @etckt as my main sources of information) and found out that the Food Network show “Dinner: Impossible” was filming an episode there that day. Since I knew that dinner was on the media event scheduled that night, I assumed that chef Robert Irvine and his crew would be serving food to all attendees of the event. Needless to say, after years of regularly watching that show, salivating over most of what Irvine prepares, I was excited to finally get a chance to sample his cuisine.

I finally got to the park at around 5:30 p.m. and immediately headed for the media center (set up inside the former Wonders of Life pavilion) to put in an interview request for Robert Irvine and/or “Dinner: Impossible” producer and former “Double Dare” host Marc Summers, who apparently was there… somewhere. Unfortunately, since I showed up so late, neither interview panned out.

The dinner area opened at 6:30 p.m. and I was ready to dive into some buffets filled with expertly-prepared food. Unfortunately, I quickly found out that the food cooked for “Dinner: Impossible” was being served only to the 350 volunteers who were part of the “Give a Day, Get a Disney Day” activities and their families. So instead of coming back here with a complete review of “Dinner: Impossible” food, I am here to say that I ate some decent Disney buffet food instead. I’m not complaining, as it was free and good, but I was a bit disappointed to not get a chance to sample what I was hoping to.

But I did get to see chef Robert Irvine when he went on stage in front of the Fountain of Nations to address the audience. Here’s a video:

Before Irvine, a teenage boy band of sorts that apparently is Disney’s “next big thing” performed on the same stage. I didn’t catch their name and by the reaction of everyone watching, I don’t think anyone believed they have any chance of being the “next big thing.”

A little while later, Radio Disney DJ Ernie D introduced Disney Channel stars Demi Lovato, Joe Jonas, Adam Hicks, Daniel Curtis Lee, Alyson Stoner, Roshon Fegan, who are all part of Disney’s “Friends for Change,” which focuses on environmentally-friendly topics. I’m not a fan of the current set of Disney Channel shows or stars, but I know thousands upon thousands of kids are, so here’s a video of that bunch on stage as well:

Finally, the main entertainment for the night was to commence. Demi Lovato and Joe Jonas returned to the stage to sing a pair of songs together, the first of which was premiering last night. It’s called “Make A Wave” and was written for “Friends for Change.” Again, here’s a video for the Lovato and Jonas fans:

The last time I saw a Jonas brother in person (actually all 3), I was at the 2007 Christmas Day Parade taping at the Magic Kingdom. At the time, I didn’t really know who the Jonas brothers were, but the hundreds of screaming girls around me certainly did. For that performance, the group lip-synched and pantomimed to pre-recorded music (though it was their music).

This time, Joe Jonas and Lovato definitely sang live and it wasn’t nearly as painful to my ears as I was expecting it to be. I can’t say that I’m a Lovato or Jonas fan now, but I didn’t mind the music either. Of course, the 500+ comments and 50,000+ views on YouTube for the above video (in less than 20 hours) tell me that the new song is sure to be a hit when its music video is premiered on Disney Channel on March 14 and is put up for sale on iTunes on March 15.

The second song they performed is called “This Is Me” and Lovato did most of the singing:

Then they were whisked away and the stage show concluded. During the second/last song, I noticed that Epcot vice president Dan Cockerell had been standing next to me watching the show. He seemed to be enjoying it (and busy communicating with important people on his Blackberry).

It was time for me to call it a night. I had a few more hours of work to do after coming home (as I said, it was a busy day at Lanyard Lab), so I skipped seeing the Illuminations fireworks show that I’ve seen so many times already.

Disney certainly knows how to put together a grand event. This one rivaled the party I attended in California for the opening of the Finding Nemo Submarine Voyage – and there wasn’t even a new attraction to celebrate this time! But they certainly got the media talking about the Summer Nightastic events coming up in a few months and re-talking about the Fantasyland expansion that won’t be ready for a couple of years. Plus, we all got to have a little fun, socialize, and eat some food. All in all, it was a fun night spent with a few celebrities and a good couple of days in the promotion of some exciting things to come. I’m looking forward to it.

Comments Off on A night at Epcot with Demi Lovato, Joe Jonas, and chef Robert Irvine