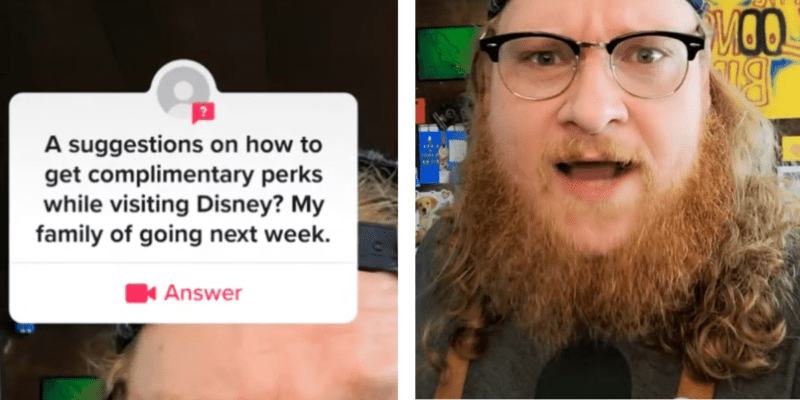 If you’re lucky, during your visit to any of Walt Disney World Resort’s four Theme Parks – Disney’s Animal Kingdom, EPCOT, Disney’s Hollywood Studios, and Magic Kingdom – you might get a “magical moment” from a Cast Member.

What is a “magical moment?” Maybe a Disney Resort Cast Member gives you a free Lightning Lane because you waited patiently in line or a free Mickey Premium Ice Cream Bar on your birthday! Whatever it may be, a “magical moment” is an unexpected memory you’ll cherish from your Disney Park visit.

A former Disney Cast Member, Thomas (@dappermanatee on TikTok), responded to a question about “magical moments” from a fan headed to Walt Disney World Resort:

A [sic] suggestions on how to get complimentary perks while visiting Disney?

“How do you get free things at Disney? I got a super good trick for that,” Thomas replied. “Treat Cast Members with dignity. That’s all. You could not tell me the amount of times that I helped somebody out just because they treated me kindly.”

Thomas said he’d regularly let kind families through the FastPass line (Now Genie+ and Lightning Lane Lines) or hand kind families some paper FastPasses he kept in his pocket for the right Guests.

Of course, Thomas said not to force conversations with Cast Members just to get free stuff at Disney:

“That is not fun for either of us. But go in there, be nice, treat them like they’re people. Respect the rules they tell you, and they will literally hand you the world… I’ve known Cast Members in Food & Beverage that give free drinks to people that treat them nice. You probably say to yourself, ‘Everybody does that!’ Nope! That’s like 20% of the people.”

One of the attractions Thomas worked at was Mission: Space at EPCOT. Before the ride could start, Cast Members had to get verbal confirmation from each Guest that they were good to go. Thomas said so many Guests just ignored him, which made him “go insane:”

“The amount of Guests that didn’t even look at me when I spoke to them… Let’s just say I’m not a violent person, but I would’ve knocked their teeth out. Just acknowledge that somebody’s speaking to you. My rule is, if it gets your teeth knocked out at a restaurant with somebody that’s not working, don’t do it at an attraction.”

It’s always important to be kind to Cast Members without expecting to receive something in return.

Has your family ever gotten a “magical moment” from a Disney Cast Member?