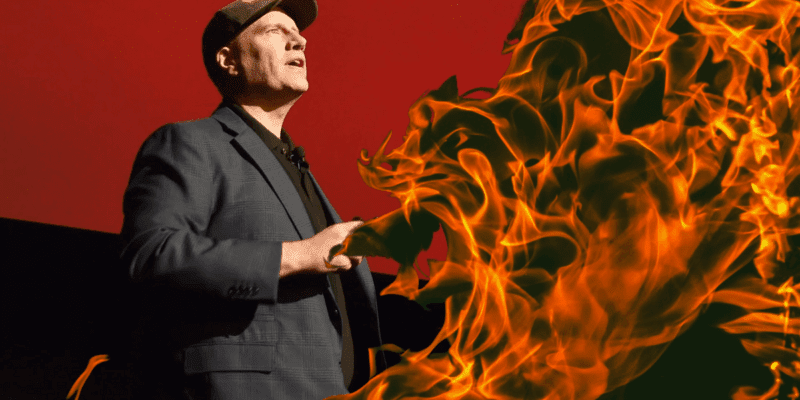 If you are not watching the Marvel Studios original series on Disney+ the MCU is leaving you in the dust. WandaVision, The Falcon and the Winter Soldier, and Loki have had major impacts on the future of the Marvel Cinematic Universe and have received overwhelming love from Marvel fans. But one show coming down the pipeline has fans apprehensive especially now that the official poster shows a problematic change to an upcoming character’s powers.

Kamala Khan AKA Ms. Marvel will be getting her own series starring newcomer Iman Vellani as the teen-aged Pakistani American from Jersey City, New Jersey. When Ms. Marvel was announced with the rest of the Marvel Phase Four original series fans could not have been more delighted that she would be the first Muslim superhero in the MCU.

But some casting decisions and rumors surrounding changes to her Inhuman origin story have left many fans apprehensive. Though Marvel Studios boss Kevin Feige has said that there are focusing on bringing more diversity to the biggest franchise in the world, there have definitely been some missteps.

The recently released trailer for the upcoming series shows a drastic change to Ms. Marvel’s powers has left fans confused, outraged, and hurt.

At first glance, the trailer depicts a comic book accurate superhero costume that even included her classic domino mask despite missing her trademark blue boots. But fans were not focusing on her stunning costume but the strange purple energy around her hand. For those who have read the Ms. Marvel comic book by writer G. Willow Wilson, it was a clear departure from the titular character’s powers.

What Are Kamala Khan AKA Ms. Marvel’s Comic Book Powers?

Kamala Khan is traditionally an Inhuman who gained polymorph or shapeshifting abilities from exposure to the Terrigen Mist. Specifically, Kamala Khan’s shapeshifting power is called morphogenetics and it works a bit differently than traditional shapeshifting. She can elongate her body, change her appearance, and even use glow yellow, also known as bioluminescence.

She mostly uses her ability to alter her size with her catchphrase “embiggen”, which became so popular that it was officially added to the Dictionary back in 2018. Her embiggen power works as she shares her mass through time with different versions of herself. When she shrinks at one point, she sends her mass to a different time allowing her to grow. Ms. Marvel essentially time-travels on a molecular level. I wonder what the Time Variance Authority (TVA) has to say about that?

What Will Kamala Khan AKA Ms. Marvel’s MCU Powers Be?

While the change depicted in the concept art seems small it reflects a drastic change in Ms. Marvel’s powers. She can turn her body into any shape she desires. She can become as thin as a sheet of paper or disguise herself as an abandoned couch. But she has never used her shape-shifting power to create purple energy or crystal constructs on her body.

There had been rumors through the production, which wrapped its Thailand shoot in May despite COVID, that a change in her powers to the MCU. Many assumed this would simply mean erasing her Inhuman ties as Marvel Studios now has the rights to the X-Men and mutants. However, it is currently rumored that she would be getting her powers from magical bracelets, not unlike Shang Chi (Simu Liu) in the Shang-Chi and the Legend of the Ten Rings (2021).

The idea is that Kamala will use her bracelet, which in the comics was an heirloom from her grandmother, to create magical constructs around her body in lieu of her shapeshifting. The glowing constructs will more resemble Monica’s Spectrum powers and Carol’s “sparkle fists“.

And combined with some other casting controversies from December, the hashtag #fixmsmarvel was born.

Why Is The Change To Kamala Khan AKA Ms. Marvel’s Powers Controversial?

The biggest controversy is not that they are taking away the Inhuman origin story. The Inhumans are not the most popular Marvel Comics team and Kamala Khan has few interactions with them, so fans are not heartbroken that she is getting revamped. Many are mad that they are adding a magical origin to her powers.

According to Wikipedia Haram is “an Arabic term meaning ‘forbidden’. This may refer to: either something sacred to which access is forbidden to the people.”

As Iman Vellani’s Kamala Khan will be the first Muslim superhero in the MCU it seems like a massive oversight in her new origin. Additionally, fans have speculated that they have changed her powers to make her more like Carol Danvers AKA Captain Marvel (Brie Larson) and Monica Rambeau (Teyonah Parris) for her upcoming team up with them in the Captain Marvel (2019) sequel The Marvels (February 17, 2023). And many speculate she will become a Young Avenger as well.

This seems like a slap into the face of Kamala Khan’s first story arc, which involved her learning to not rely on her shapeshifting ability to masquerade as Captain Marvel and become a hero on her own terms with her own identity. It is a central part of her character to be distinct from the other Marvels so changing her powers to be more like them is also angering fans.

Her powers were purposely grotesque. The body horror aspects represented the way that Kamala Khan felt about herself. She felt like a monster and unworthy of being one of Earth’s Mightiest Heroes because she grew up internalizing racist and misogynistic ideals about her body. Only by learning to embrace this aspect of herself did she become the hero she was always meant to be. Making her new powers more aesthetically pleasing completely dismisses that.

Additionally, Marvel fans have keyed on a possible motivation for this change. Reed Richards AKA Mr. Fantastic’s stretching ability is very similar to how Ms. Marvel uses her shapeshifting ability.

Twitter User Keanu Comics shared how they were disappointed that Marvel Studios is taking power away from a young woman of color so that a typically white man could stand out more saying:

I’m so disappointed with the direction they’re taking Ms.Marvel :/ As someone who loves her comics, it really sucks that they seem to wanna change her powers completely (especially if it’s just to differentiate her from Mr.Fantastic)

I’m so disappointed with the direction they’re taking Ms.Marvel :/ As someone who loves her comics, it really sucks that they seem to wanna change her powers completely (especially if it’s just to differentiate her from Mr.Fantastic 🙃) https://t.co/6rK1eQmRym

Marvel has no shortage of characters with similar powers so this explanation rings hollow for fans. There are countless super soldiers in the MCU like Steve Rogers AKA Captain America (Chris Evans), Bucky Barnes AKA Winter Soldier (Sebastian Stan), and John Walker AKA U.S. Agent (Wyatt Russel).

And while fans are more than a little excited about the three different Peter Parker AKA Spider-Man in Spider-Man: No Way Home ( 2021), the idea that Marvel fans could not tell the difference between Kamala Khan and Reed Richards, the human equivalent of mashed potatoes, is insulting, to say the least.

This is also why the explanation that is a budgetary reason also is unable to assuage fans from their ire. Marvel Studios has proven it is not a typical film or television studio. They don’t showrunners like shows on network TV. They have used special effects extensively in other shows, like Loki where fan-favorite characters like Alligator Loki were entirely CGI.

Kevin Feige’s Marvel Studios will have found the money and capacity to pull off a realistic version of Kamala and Reed’s powers by the time that The Fantastic Four reboot comes to theaters. It is simply a matter of that they do not believe Kamala Khan, a brown girl from New Jersey, is worth the investment.

The series is already facing an uphill battle by targeting a new segment of the Marvel fanbase. Kamala is an unknown character to fans who have only seen the films, her story is being labeled as “unrelatable” and too “woke” by racists, and fans who do love her are now turned off by this series.

What Other Controversies Are Happening With Ms. Marvel?

Adding to the scandal, fans are also outraged by the over-representation of military imagery, which has never been associated with the teenage superhero. Not to mention the issues with the casting process. They’ve created a page to keep track of all their issues.

Some fans point to issues including casting Zenobia Shroff (The Big Sick) as Kamala Khan’s mother Muneeba Khan. Zenobia Shroff is a non-Muslim Indian actress. Also, Yasmeen Fletcher (Upside-Down Magic), a half-Caucasian Christian actress, has been cast as Kamala’s friend, Nakia Bahadir (a Turkish Muslim who wears a hijab). As there are so few roles for hijabi actresses casting two non-hijabi women in these roles is tantamount to culture as costume, a problematic form of cultural appropriation. Yasmeen Fletcher addressed her role in the series on the red carpet of Spider-Man: No Way Home (2021).

Aramis Knight (Into the Badlands) who will be playing Kareem AKA Red Dagger got some pushback for being white-passing. It would not be the first time Disney received criticism for this form of whitewashing since they recently had to re-edit Star Wars’ The Bad Batch to correct characters’ skin tones. Also, Matt Lintz who will be playing her Italian best friend Bruno Carelli has brought on his own backlash after tweeting support of Donald Trump. Though he later walked back his political stance.

This is far from the first time a comic book character’s origin and powers were changed for the MCU. Sam Wilson AKA Falcon, our New Captain America (Anthony Mackie) can talk to birds and actually fly in the comics. But it is definitely the first time it seems to have been done in contrast with some of the central aspects of the character.

Bisha K. Ali was hired to serve as the head writer after working as a writer on the Loki series. Recently the series was delayed again. It wa rumored to be undergoing major reshoots and while fans hoped these could be used to correct some of the issues that they have with the series Disney and Marvel Studios, the trailer revealed it did not.

Let us know in the comments how you feel about the change in Ms. Marvel’s powers and origin in the MCU.