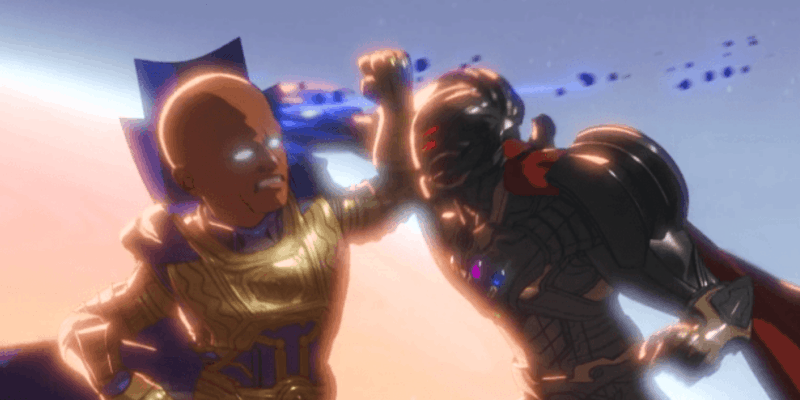 How was the What If…? version of Ultron able to wield the Infinity Stones across the Multiverse? Many Marvel fans seemingly can’t get past what they are calling a major plot hole that reverses an important Phase 4 reveal from the MCU’s Loki series. What If…? showrunner A.C. Bradley took to Twitter to set the record straight — and defend her Marvel Cinematic Universe logic.

In the penultimate episode of What If…? Season 1, Marvel fans are invited to ponder the question presented in the episode’s title — “What If…Ultron Won?” The episode presents an alternate timeline to the Sacred Timeline of the Marvel Cinematic Universe that we all know and love. In this dark timeline, the events of Avengers: Age of Ultron (2015) didn’t turn out so well for the Avengers.

In What If…? episode 8, Ultron won by succeeding in merging his consciousness within the powerful android “Vision” body — enabling him to master the Mind Stone and destroy the Avengers — bringing humanity to the brink of extinction.  As Ultron grows in power, he easily takes control of the remainder of the Infinity Stones from Thanos (Josh Brolin). “Infinity Ultron” soon becomes aware of The Watcher (Jeffery Wright) and the existence of the Multiverse. Ultron uses the Infinity Stones to battle The Watcher throughout many timelines of the Multiverse.

Related: How ‘Loki’ Finale Gave Marvel Its Next Endgame

However, according to the premiere episode of Loki Season 1, that shouldn’t be possible. Loki (Tom Hiddleston) is dumbfounded in the premiere episode when a TVA agent reveals a drawer full of impotent Infinity Stones — claiming they are mundane enough to be used as paperweights. This signaled to audiences that Infinity Stones are powerless outside of their home universe.

What If…? Showrunner A.C. Bradley claps back on Twitter

Brushing off the haters easier than Infinity Ultron brushes off Thanos with the Mind Stone, What If…? head writer A.C. Bradley took to Twitter to explain her logic to fans calling out the perceived plot hole. With perhaps just a dusting of passive aggression, the writer wished fans a “Happy Monday!” before setting the record straight, saying,

“Happy Monday! Just a reminder that Ultron is using the Infinity Stones to power himself (same universe being). Also he’s legit punching across multiverses turning them into one messy universe soup. #WhatIf #WhatIfMarvel #WeDidOurHW #YouAreAllAmazing”

Happy Monday! Just a reminder that Ultron is using the Infinity Stones to power himself (same universe being). Also he's legit punching across multiverses turning them into one messy universe soup. #Whatif #WhatifMarvel #WeDidOurHW #YouAreAllAmazing ♥️

In her posts’ accompanying hashtags, Bradley lets her fans know she thinks they’re all amazing while reminding them that the Marvel Studios writing staff did their homework for the episode. Bradley says that because Ultron can power himself with his universe’s Infinity Stones he’s able to crash through the boundaries of the Multiverse, effectively reducing those boundaries to “messy universe soup.”

One could reasonably extrapolate from that explanation that beings can wield Infinity Stones from their own universe, even if the being and the Infinity Stones were outside of that shared Universe. It’s possible that the TVA’s Infinity Stones that Loki saw wasting away in a drawer were not from his universe. Perhaps if Loki were to encounter a Sacred Timeline Infinity Stone, he’d be able to take advantage of its power.

Or perhaps Infinity Ultron’s advanced artificial intelligence is controlling the Infinity Stones in a way never devised by Loki, Thanos, or any other being.

In Age of Ultron, our heroes are able to stop Ultron (James Spader) from causing an extinction-level event intended to reboot human evolution. Ultron’s plan was to place his consciousness into an android body, making the human body obsolete. That plan was thwarted when the Avengers stole the Regeneration Cradle and repurpose the superior android body to create Vision (Paul Bettany).

In What If…? Ultron is successful in creating the “Vision” android body and making it his own. With the power of the Mind Stone and flanked by his Ultron sentries, this version of Ultron is able to kill Iron Man (Mick Wingert), Captain America (Josh Keaton), Hulk (Mark Ruffalo), and Thor (Chris Hemsworth) and set off a global nuclear disaster that brought humanity to the brink of extinction. As Ultron seeks to end organic life throughout the universe, the only Avengers left on Earth to contend with the “peacekeeping” Ultron bots are Hawkeye (Jeremy Renner) and Black Widow (Lake Bell).

What If…? Season 1 Finale on Disney+

Season 1 of What If…? will air its finale on Disney+ Wednesday, October 6. On this date, subscribers will be able to stream all 9 episodes of What If..?

You can catch up on all the other Marvel Cinematic Universe series — WandaVision, The Falcon and The Winter Soldier, and Loki — with all episodes currently streaming on Disney+. Up next is the Hawkeye series, with the first episode premiering November 24.

Do you buy What If…? showrunner A.C. Bradley’s plot hole explanation? Let us know in the comments!