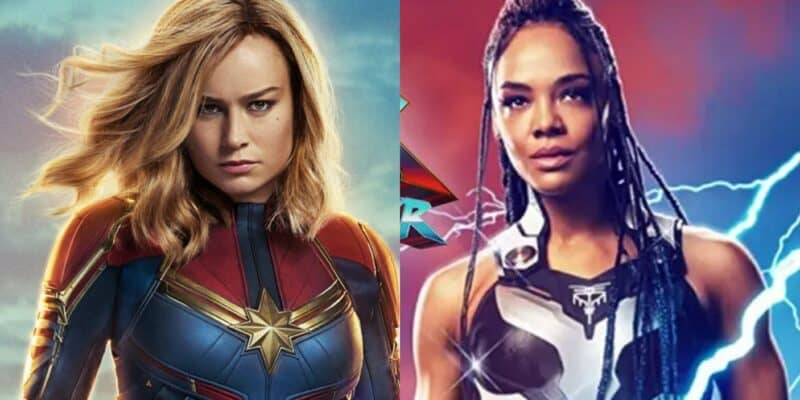 Thor: Love and Thunder is opening in theaters this July 7, 2022 — meaning cinemas all around the world (and Marvel fans) are beginning to catch their first glimpse of the much-anticipated Marvel Cinematic Universe (MCU) offering directed by Taika Waititi, starring Chris Hemsworth as the titular God of Thunder Thor Odinson, Tessa Thompson as New King of Asgard Valkyrie, Natalie Portman as Thor’s ex, Jane Foster (and now, the Mighty Thor) and Christian Bale as Marvel “Big Bad” Gorr the God Butcher.

Now, one Love and Thunder actor has come forward to express their thoughts on the possibility of a romance between the two oft-shipped characters, newly crowned King Valkyrie and Carol Danvers, AKA Brie Larson’s Captain Marvel.

Tessa Thompson, who plays the character Valkyrie in the Marvel Cinematic Universe and Thor series of films, was introduced to audiences in Taika Waititi’s Thor: Ragnarok (2017), as the blunt-yet-nonchalant drunk ‘Scrapper 142’ — who Chris Hemsworth’s Thor discovers to be a ‘retired’ member of the all-female elite band of Asgardian warriors, the Valkyries.

The character of Valkyrie has been frequently shipped (fandom shorthand for “relationship”) with Carol Danvers, the Marvel Cinematic Universe’s current Captain Marvel.

Speaking to Pinkvilla, Thompson comments on the likelihood of “Valcarol” — the relationship portmanteau of Valkyrie and Carol Danvers, as bequeathed by Marvel fans:

(laughs) I, you know, the heart wants what it wants. I don’t… I can’t speak yet to Val. She hasn’t had a ton of time to focus too squarely on her love life since she’s been besought with a lot of kingly duties

She continues, discussing whether a relationship with Carol Danvers is truly in the cards for new monarch King Valkyrie of New Asgard:

But there are a lot of amazing men, women, other wordly creatures inside of the MCU and certainly in the canon of characters that could enter the MCU. So, I think there’s so many fish in the sea. She’s single. She’s ready to mingle. And I love, both in the comics, Carol and I… Brie Larson is a good friend of mine and I love spending time with her. So, I wouldn’t be mad at it, for sure

Though “besought with a lot of kingly duties”, it seems that the Valkyrie actor herself Tessa Thompson is entirely open to a possible relationship between the two iconic female MCU superheroes.

This definitely falls in line with the likely future of the Thor franchise and characters within MCU canon, considering previous comments from Natalie Portman and director Taika Waititi, stating how the new Thor: Love and Thunder already turned out “super gay” — even without any explicit LGBTQ+ romances in its 120 minute runtime.

A full-out romance between these two such prominent Marvel Cinematic Universe characters would definitely prove a major turning-point in LGBTQ+ representation — not just in the world of the MCU, but in film history as a whole.

Whether Marvel Studios will actually take that step though, is another matter entirely.

What do you think of a possible “Valcarol” romance? Do you plan to watch Thor: Love and Thunder? Share your thoughts in the comments down below!

Part of the Marvel Cinematic Universe, ‘Thor: Love and Thunder’ is slated to premiere in theatres July 8, 2022.