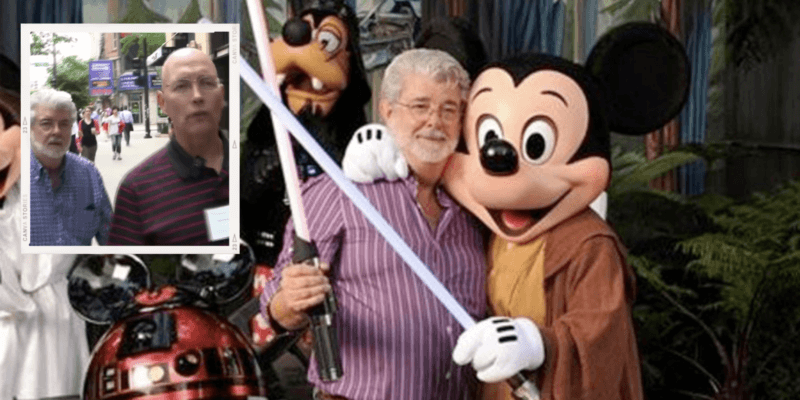 Lucasfilm, Ltd. founder and Star Wars creator George Lucas is one of the most famous faces in entertainment.

Related: In His Own Words: George Lucas FINALLY Shares Why He Sold ‘Star Wars’

Now, the Star Wars guru has appeared — quite inadvertently, it would seem — in a random documentary film about “pyro-processing,” which apparently involves molten salt and electrochemistry.

In the short YouTube video below, viewers can see Lucas hilariously walk through the background, seemingly returning to his hotel. The Star Wars creator looks slightly confused by the camera at first before continuing on his way:

Perhaps the funniest part of the entire video is Lucas’s outfit, which is nearly a carbon copy of the attire that most George Lucas impersonators wear when they portray the Hollywood icon — see the depiction from a Saturday Night Live (SNL) skit below:

Lucas sold Lucasfilm — including both the Star Wars and Indiana Jones (a new Indiana Jones movie is set to film in 2021) franchises — to The Walt Disney Company in 2012 for a cool $4 billion, allowing the House of Mouse to take creative control of the universes he spent his lifetime creating.

“Most people don’t understand the style of Star Wars. They don’t get that there’s an underlying motif that is very much like a 1930s Western or Saturday matinee serial. It’s in the more romantic period of making movies and adventure films. And this film is even more of a melodrama than the others.”

No matter what your personal feelings are about George Lucas — and the Star Wars fandom has many — the allure of his iconic characters, like Luke Skywalker (Mark Hamill), Princess Leia Organa (Carrie Fisher), Han Solo (Harrison Ford), C-3PO (Anthony Daniels), Master Yoda (Frank Oz), and more, has withstood the test of time.

Over 40 years after Star Wars: A New Hope originally debuted in theaters — it wasn’t Episode IV in 1977, remember — Lucas’s beloved characters live on and have even helped to usher in the latest chapter in the Star Wars universe, Jon Favreau and Dave Filoni’s hit Disney+ show, The Mandalorian, which is set for its third season.

At Disney’s 2020 Investor Day event in December, current Lucasfilm President Kathleen Kennedy announced that the series has already given rise to three spinoffs — Ahsoka (featuring Rosario Dawson as the Star Wars Rebels and Star Wars: The Clone Wars character), Rangers of the New Republic, and The Book of Boba Fett (featuring Temuera Morrison as the bounty hunter and Ming-Na Wen as Fennec Shand).

Are you excited about the new streaming era of Star Wars with The Mandalorian at its center?