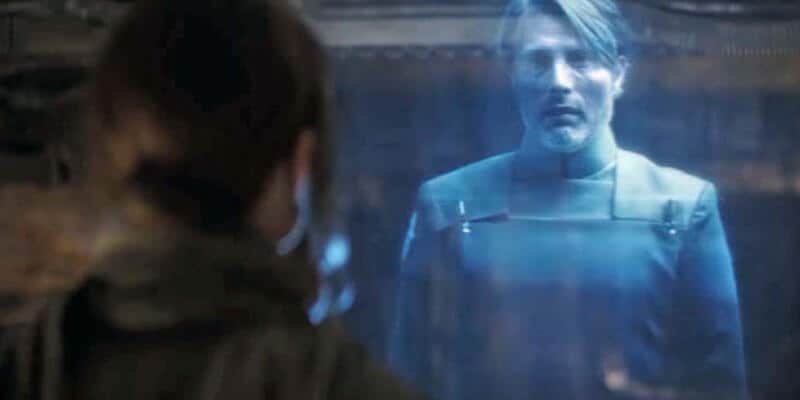 Actor Mads Mikkelsen has quite the resume, from playing Dr. Hannibal Lecter in the Hannibal TV series to portraying Kaecilius in Marvel’s Doctor Strange (2016) alongside Benedict Cumberbatch.

He is also set to take over the role of Gellert Grindelwald in the Fantastic Beasts franchise following Johnny Depp’s firing. For Star Wars fans, though, Mikkelsen will always be Galen Erso from Rogue One: A Star Wars Story (2016).

Erso was the father of Rogue One main character, Jyn Erso (Felicity Jones), and was a “leading galactic authority on crystallography and energy enrichment,” according to his Wookieepedia entry. Erso was part of the Republic Futures Program, where he reluctantly helped to develop the DS-1 Death Star plans.

During his tenure on the project, Erso subtly sabotaged the design. This ultimately proved to be disastrous for Imperial forces.

As most Star Wars film fans know, Rogue One underwent a number of changes during production. Recently, Mikkelsen sat down with the Happy Sad Confused podcast to share details about his upcoming film Chaos Walking — which also stars Star Wars sequel trilogy alum, Daisy Ridley (Rey) — and the conversation inevitably turned to the Star Wars universe.

“Some of it was a little chaotic. There was no secret that there was some rewriting in the script while we were doing it. And when you do that…it is obviously very tricky for the actors to know ‘What am I carrying into this room now? I opened the door. I’m not back to what happened before.’ So there was some of that.

Having said that, it always felt like a solid story. A young girl lost, [who] doesn’t know where she belongs in the world. Then an Oppenheimer story unfolds. She’s always heard he [Galen] was this, and then she realizes he was that. And it was quite beautifully written. At the end of the day, the changes that were in the film were not as dramatic as people talk about. It was tweaks, but obviously, if you do it while you’re working it can be confusing.”

It remains unclear exactly what was cut from the Rogue One story, with the exception of a shot of Orson Krennic (Ben Mendelsohn) walking through a slew of dead stormtroopers and an impactful scene featuring Darth Vader and Grand Moff Tarkin (Guy Henry).

For those unfamiliar with the timeline of Rogue One, it takes place about 20 years after the final prequel trilogy film, Star Wars: Episode III – Revenge of the Sith (2005), and just before George Lucas’s first Star Wars movie, Star Wars: Episode IV – A New Hope (1977), which launched the Skywalker Saga — and introduced Princess Leia (Carrie Fisher), Luke Skywalker (Mark Hamill), and Han Solo (Harrison Ford) — over 40 years ago.

What’s next for Rogue One?

Overall, Rogue One: A Star Wars Story got a positive reception from Star Wars fans — it has certainly been less divisive than the sequel trilogy and even gave rise to a couple of fan-favorite characters, Captain Cassian Andor (Diego Luna) and droid K-2SO (Alan Tudyk).

As a matter of fact, the swaggering Captain — reminiscent of devil-may-care original trilogy character Han Solo — in some ways — is set to receive his own prequel series on Disney+. The show is currently filming in Little Marlow, England where a massive set has been erected.

At the 2020 Disney Investor Day event, Lucasfilm President Kathleen Kennedy shared a sizzle reel for the upcoming series, which has the tagline, “Everything I did, I did for the Rebellion.”

“Everything I did, I did for the Rebellion.” Andor, an Original Series set in the Star Wars universe, is streaming in 2022 on #DisneyPlus. pic.twitter.com/q2IT2qzEeR

Andor will follow the Rebel spy and his cohorts in the earliest days of the Rebellion, about five years prior to Rogue One.

You can catch Andor streaming on Disney+ in 2022. What do you think about Mikkelsen’s assessment of Rogue One? Would you like to see him reprise his role as Galen Erso at some point?