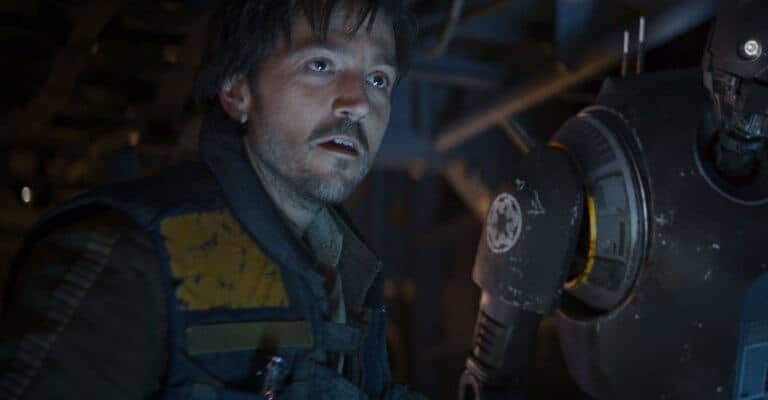 Sometime this year, in a galaxy far, far away, Diego Luna will return as the Rebel spy, Cassian Andor, in the new live-action Andor series from Lucasfilm. And the beginning has just been revealed.

Debuting sometime after Obi-Wan Kenobi, which brings back Ewan McGregor (Obi-Wan Kenobi) and Hayden Christensen (Anakin Skywalker), Andor will act as a prequel to Rogue One: A Star Wars Story (2016). Set five years before the climactic events at the end of Rogue One, when Andor and Jyn Erso (Felicity Jones) sacrificed themselves for the Rebel Alliance, the series will explore some of the darkest times in the Star Wars saga so far.

In a new interview with Vanity Fair, Andor creator and showrunner, Tony Gilroy divulged new information regarding the upcoming series.

Gilroy stated in the interview that he sees the first two seasons of Andor as two halves of a novel, potentially impacting the reported three-season run — already down from five seasons — of the upcoming Star Wars series. Andor, while feeling like the forgotten Star Wars series amid the expanding “Mando-Verse”, will apparently capture even the most casual Star Wars fans attention with its action-packed, spy-thriller dynamic, and now, the showrunner has quietly revealed details about how the Rogue One prequel will begin.

“Our show starts with a very simple, almost film noir situation for a thief. A skeevy kind of guy gets in big trouble, tries to sell something he has to save his ass,” Gilroy reveals. “A Rebel talent scout has been watching him with interest, and he’s sort of recruited on the worst day of his life.” That story line focuses on Luna and two unspecified characters played by Stellan Skarsgård and Adria Arjona. “On episode four, we leave there and we begin to expand out…”

The report suggests that Andor will take on a Better Call Saul approach to storytelling, weaving together multiple narratives adjacently before bringing them together in (hopefully) satisfying ways.

It is not just the morally-grey, Cassian Andor, that the new Star Wars series will dissect. As both Gilroy and Luna state, Andor takes place amid the height of the Galactic Empire’s takeover of the galaxy far, far away, approximately five years before the events of Rogue One.

Where Dave Filoni’s The Bad Batch captured the events of the Order 66 aftermath, and Deborah Chow’s Obi-Wan Kenobi set to explore the decade following the Star Wars: Episode III — Revenge of the Sith (2005) tragedy, Andor will take place as close to the original trilogy as The Mandalorian, albeit from the other side.

On Andor, Gilroy states the show will explore the Imperial annihilation of freedom:

“[Andor’s] adopted home will become the base of our whole first season, and we watch that place become radicalized […] Then we see another planet that’s completely taken apart in a colonial kind of way. The Empire is expanding rapidly. They’re wiping out anybody who’s in their way.”

“They’re taking over the corporate planets […] They’re tightening up their supply chains.” What the Empire doesn’t destroy, it consumes. “It’s all the ways that oppression can pull a culture apart and destroy it.”

It seems that Andor will be a brutal and dark look at the devastation Emperor Sheev Palpatine and his Imperial forces reek on the galaxy prior to Princess Leia Organa (Carrie Fisher) utilizing the stolen Death Star plans, and the arrival of future Jedi Master Luke Skywalker (Mark Hamill).

But, it also looks set to give Mon Mothma a chance in the spotlight. The character, played by O’Reilly, was sidelined in Revenge of the Sith, finally gaining significance in the Star Wars story told in Rogue One, where she assisted Andor and Erso on their dangerous quest. Gilroy stated that Star Wars fans would be rooting for the Rebellion founder come the first season’s fourth episode, so it stands to reason that Mon Mothma will play a pivotal role in the Andor series.

With The Mandalorian, The Book of Boba Fett, The Bad Batch, and the soon-to-be Obi-Wan Kenobi, the Ahsoka Tano series, and The Mandalorian Season 3, the four-decade-long saga just gets bigger.

Are you looking forward to Andor? Let us know in the comments down below!