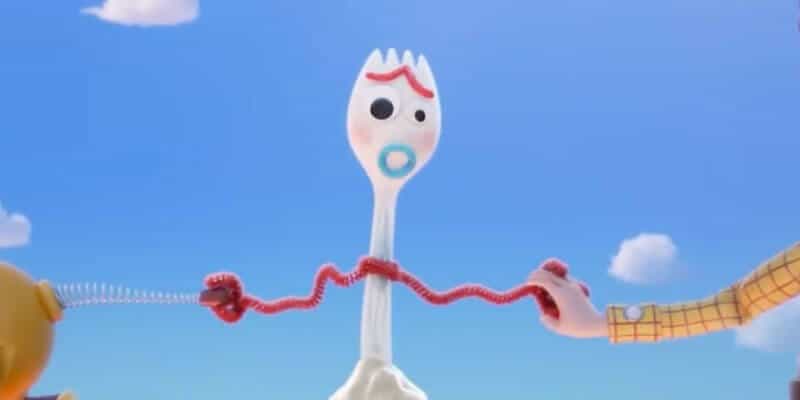 If you’ve seen any of the new trailers or posters for “Toy Story 4,” you’ve probably been wondering why one of the main characters in the upcoming film is a silly looking spork. Well, that spork is Forky, and let’s just say he’s a lot more than meets the eye. While it may be confusing why Pixar chose a spork to be the headlining character for the long-awaited fourth film in the “Toy Story” series, like with all Pixar movies, we as fans have got to trust that they know a good thing when they see it.

Inside the Magic recently had the opportunity to sit down with the team behind “Toy Story 4” at Pixar Studios, and we’re eager to share what we learned about Forky with you (and why he may be our favorite character in the upcoming film).

So who is Forky, and why did Pixar pick a spork for a primary character? To help Bonnie as she starts kindergarten, Woody encourages her to create her own toy, and from that moment Forky was born. Forky is created from remnants found in a trash can, given the name “Forky” even though he’s clearly a spork, and doesn’t understand why he’s been turned into a toy and given a newfound purpose when he’s simply a bunch of stray parts glued together. Plus, naturally, he looks like he was created by a five-year-old. Throughout the film, Woody teaches Forky what it means to be a toy for a child who loves you, which is quite possibly the most wholesome message we’ve ever heard.

Get ready to make a new friend. #ToyStory4

Here’s why Forky is such a great and dynamic character for “Toy Story 4”: we’ve never seen anything like him before. We’ve never really seen a kid make a toy in any of the “Toy Story” films (okay, other than Sid in the first “Toy Story,” but we won’t go there). So the director Josh Cooley, producer Mark Nielsen and the team wanted to figure out what it would be like for Bonnie to actually make a toy and bring it to life completely on her own.

“We were sitting in the story room and we were joking about how our kids will take the Christmas present and play with the box before they play with the actual toy sometimes,” director Josh Cooley shared. “So does that mean the box comes to life? How would that work? We were going down this bizarre path, and then we said, what if Bonnie actually made a toy? We’ve never seen that in ‘Toy Story.'”

And whenever the creators thought of anything they hadn’t yet done in a toy story film, they wanted to see where they could take it. “In number 4, there’s a lot of things that have happened already, and you don’t want to retread down the same steps,” Cooley said. And given the response to Forky so far, it seems like their idea has paid off. Forky has been a pretty confusing character to get used to, but as we see him more and more in the film’s advertisements and after listening to the team speak about his character, we can’t help but fall more in love with the comical spork toy that Bonnie has created.

But we’re not the only ones enamored by Forky. Producer Mark Nielsen shared that when they were pitching the character of Forky to actor Tony Hale (who voices Forky in the upcoming film), Hale became drawn to the character for one main reason: Forky doesn’t understand why he’s alive. Forky is a toy made out of garbage whose primary struggle is wondering, “Why am I alive in the first place?” As soon as Hale heard this, he said, “I want that. That’s it. Count me in.”

Forky’s differences go beyond his existential crisis. Since Forky is a toy made by a five-year-old kid from bits and pieces she finds in her kindergarten classroom, the creators knew he had to look different than the rest of the toys in the film. Cooley said, “The first couple of tests, he looked beautiful, and I said ‘No, he needs to be crappier.’ Because he’s so different from all the other toys in this world, he should have a handmade quality to the way that he moves.” Forky doesn’t blink like other toys do; his googly-eyes don’t make that possible (and as you can see in the trailer, they, along with other parts of Forky, can fall off his body). Cooley noted that he wanted him to look like a kid had been hitting Forky against a table while they were playing with him: in short, Forky looks kind of messed up, but that’s part of his charm. Forky looks mangled and imperfect, just as a toy handmade from a spork would look in real life.

We’ve fallen in love with Forky, and we can’t wait to see him next month when “Toy Story 4” hits theaters. For now, we’ll be re-watching every trailer we can (and maybe even making our own toys just to see what it feels like to be a kid again).

Can you name another Pixar movie that features a spork? Be the first to share in the comments below.

Don’t miss our other article from the same interview and stay tuned to Inside the Magic as we share more insights from the creative team behind Toy Story 4 coming to theatres June 21.

Pixar may follow “Toy Story 4” with a fifth film