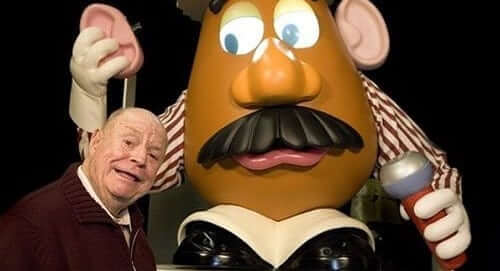 Don Rickles had an incredibly long and popular career as quite possibly the most famous insult comedian in the entertainment industry. He passed away today at the age of 90.

Rickles is best known to Disney fans as the voice of Mr. Potato Head in all three Pixar “Toy Story” films.

But Don Rickles was known to fans worldwide long before “Toy Story” was even a twinkle in John Lasseter’s eye. He got his start in a Miami Beach nightclub, where singer Frank Sinatra noticed him (after being insulted from the stage, of course) and brought him to perform in Las Vegas, where he became an instant hit.

Rickles became known as “Mr. Warmth” (also the title of a 2007 documentary about the comedian directed by John Landis) for his quick-witted, piercing barbs, and made countless appearances on late-night television talk shows and in dozens of movies over the decades.

Don Rickles will always be remembered.