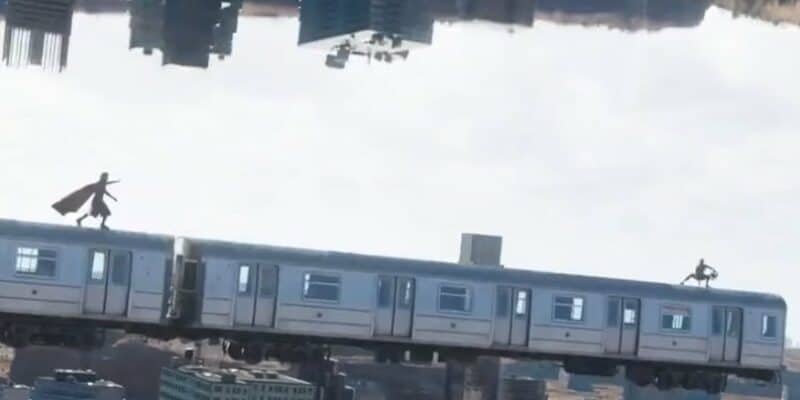 Benedict Cumberbatch (Doctor Stephen Strange) is a Marvel Cinematic Universe fan favorite, with the MCU faithful chomping at the bit to see his full appearance in Spider-Man: No Way Home on December 17, 2021.

Now, newly released No Way Home footage has given fans a glimpse at a seemingly terrifying version of Doctor Strange — one that some fans are convinced they’ve already seen this year in the animated series, What If…?.

One commenter expressed excitement about this scarier version of the Sorceror Supreme making his potential live-action debut, writing “…that spell in the first few seconds!”

Pretty much confirmed it’s Dark Dr Strange from What If

Pretty much confirmed it’s Dark Dr Strange from What If

What If…? Episode 4 explored Dark Doctor Strange, with one article summarizing:

This episode diverges from the mainline MCU early in Strange’s 2016 solo movie. Instead of traveling to his speaking conference alone and having his hands horribly injured in a car crash, fellow surgeon and lover Christine Palmer (Rachel McAdams) is with him. She’s killed in the crash, which pushes Strange to learn the mystic arts.

He initially follows the same path as his mainline counterpart, defeating interdimensional being Dormammu and setting up as Sorcerer Supreme in the New York City Sanctum Sanctorum. Reality shifts further when he uses the power of the Time Stone to travel back to the night Christine died and tries to change that event.

Eventually, The Ancient One (Tilda Swinton) shares that Palmer’s death is an “Absolute Point” in time and cannot be altered. This, understandably, traumatizes Strange and, during his quest to resurrect the woman he loves, develops the ability to absorb other beings, many of which have a very dark bent.

This ultimately leads to the creation of the “Dark Doctor Strange” fans are convinced they just saw in the newest No Way Home sneak peek.

While the appearance of this character in live-action has yet to be confirmed by Marvel Studios President Kevin Feige or anyone else involved in the production of the movie, it seems likely now that Tom Hiddleston’s Loki has broken the Marvel Multiverse wide open.

More on Spider-Man: No Way Home

For the first time in the cinematic history of Spider-Man, our friendly neighborhood hero is unmasked and no longer able to separate his normal life from the high-stakes of being a Super Hero. When he asks for help from Doctor Strange the stakes become even more dangerous, forcing him to discover what it truly means to be Spider-Man.

Do you think Dark Doctor Strange is making his live-action MCU debut?