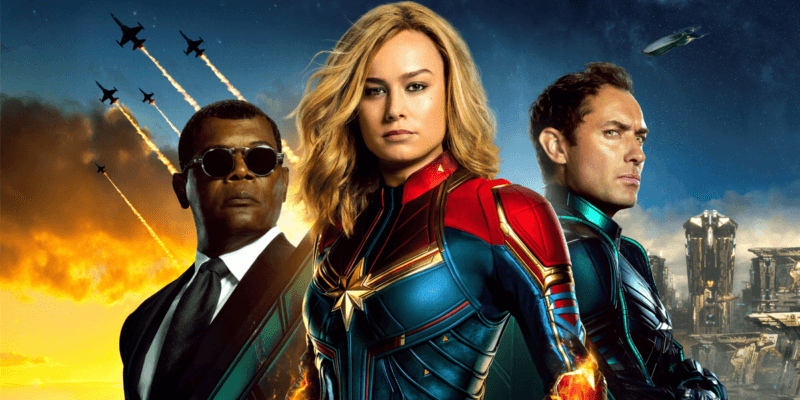 Marvel released a video celebrating the best moments from Marvel movie history and revealed some of what is to come in Marvel’s Phase 4 – including exciting new details for the upcoming Captain Marvel sequel. And Captain Marvel will be going higher, further and faster baby and she won’t be going it alone.

The film was first announced back in January 2020, with WandaVision writer Megan McDonnell writing the script. But now fans know that the new female superhero film is officially coming to theaters on February 17, 2023 – a fact that had been previously leaked. But it’s nice to hear it directly from the mouth of Marvel.

And we now know that Captain Marvel 2’s official title will be The Marvels. This is a perfect title for a film that has been previously described as a miniature Avengers film. And its title card hints at the larger team that will be coming together by integrating symbols from Monica Rambeau and Kamala Khan’s superhero costumes, the “A” for Spectrum, and the “S” from Ms. Marvel.

The upcoming sequel to the first female superhero-led film in the Marvel Cinematic Universe will be directed by Little Woods’ (2018) Nia DaCosta. DaCosta is the first black woman to direct an MCU movie. And it will move past the origin story fans say in the first Captain Marvel film starring Oscar winner Brie Larson and give us even more powerful female characters.

Related: Marvel Is Being Sued For Allegedly Stealing Costume Design

Who Will Be In The Marvels

Carol Danvers (Brie Larson) is set to be joined by a whole team of characters and will take place in the present day. Most exciting is the list of characters who will join Captain Marvel. This includes Monica Rambeau (Teyonah Parris) from WandaVision, who was just as pumped as the rest of the Marvel fans when the title was revealed, saying “let’s go” in her Instagram stories.

For those who do not remember where we last left Monica – she helped Wanda Maximoff/ Scarlet Witch (Elizabeth Olsen) through her grief at losing the love of her life Vision (Paul Bettany). To this end, Monica entered Wanda’s Hex multiple times, which gave her superpowers.

While WandaVision did not delve much into Monica’s powers, in the comics her powers range from intangibility to energy manipulation. Monica Rambeau goes by many names in Marvel Comics including Spectrum, Photon, and she was Captain Marvel before Carol Danvers ever was.

Related: Marvel Releases HUGE Tease For Fantastic 4 in the MCU

Also joining the film will be Iman Vellani as Kamala Khan/ Ms. Marvel. Her new Disney+ original series will be airing sometime later this year. Kamala Khan is an Inhuman with the ability to manipulate the size, shape, and appearance of her body. She was inspired to become a hero after watching Captain Marvel save the world.

Not much is known about Ms. Marvel or where it will leave its title character. Though her Ms. Marvel costume was recently leaked, and it looks like the series will keep her close to her comic book origins. She is probably just as excited as MCU fans are to join forces with Carol Danvers in The Marvels.

Ms. Marvel will be the first Muslim superhero in the MCU and her series was originally expected by the end of 2021. However, it was recently announced that Hawkeye, starring Jeremy Renner as Clint Barton and Hailee Steinfeld as Kate Bishop will be the next live-action series on Disney+. Hawkeye is not dropping until November 24, so Ms. Marvel is now not expected until early 2022 at the soonest.

Related: Major Move Shakes the “Core of the Marvel Universe”

Jude Law is also returning as Yon-Rogg alongside a rumored Clive Owen-type, who will be playing his brother. The speculation is that while Yon-Rogg will start out the film as a villain he may join forces with Captain Marvel against a new main villain played by Zawe Ashton (Netflix’s Velvet Buzzsaw).

Though who Ashton is playing remains unconfirmed. Theories include Karla Sogen AKA Moonstone or the Shi’ar queen, Cal’syee Neramani, AKA Deathbird. The villain most likely will be someone of an Avenger-level threat like Thanos (Josh Brolin) who Captain Marvel nearly defeated in Avengers: Endgame (2019). If Carol Danvers is going to need all the help that she can get.

Recently South Korean Actor Park Seo-joon (Parasite) was added to the IMDb cast page in another unnamed role. Rumors have him as one of three possible characters. The first is Korean superhero Amadeus Cho AKA Brawn, a teammate of Kamala Khan’s from the comics. The second is another version of Captain Marvel, also known as Marvel Boy, the Kree warrior Noh-Varr.

And possibly another Young Avenger who has not been announced – Theodore Altman AKA Hulkling, who is half-Kree/ half-Skrull and is the son of the original Captain Marvel, Mar-Vell. Though Mar-Vell was gender-bent in Captain Marvel and played by Annette Bening.

Who Else is Rumored to Appear

Ever since the Nova Corps showed up in Guardians of the Galaxy (2014), is that Nova will show up in the Marvel Cinematic Universe at some point. It has been speculated that the human rocket (either Richard Rider, Sam Alexander, or both) may play a part in The Marvels.

Since the Nova Corps are essentially the Marvel universe’s space police, and we know that Captain Marvel has been spending time out in space solving problems on worlds that do not have their own team of Avengers. It seems logical that she might have a run-in with the Nova Corps at some point.

Another unconfirmed rumor is The Marvels will introduce Blue Marvel AKA Adam Brashear. Blue Marvel can absorb and manipulate anti-matter, which he can use to create energy blasts. There was a casting call for a character that fit his description back in March and one unsubstantiated leak has Star Wars’s John Boyega in this role.

Blue Marvel is an engineer who once saved Spectrum’s life. So many speculated he could have been Monica Rambeau’s engineer friend back in WandaVision. It would be a shame to have The Marvels without him. He even has a history of working with SWORD, which is sure to play a role in the upcoming Captain Marvel sequel.

Related: All Phase 4 Marvel Films Will Intersect With Disney+

It has not been confirmed if Samuel L. Jackson will return as SHIELD Director Nick Fury or if Ben Mendelsohn’s Skrull Talos will appear. They will busy in the upcoming Secret Invasion series coming to Disney + either late 2022 or early 2023. The timing suggests that neither character will join Captain Marvel’s new team of super-powered marvels.

The Marvels should not be confused with the Marvel Comics series of the same name. The Marvels comic centers on a wide range of comic book characters including Avengers, the Punisher, and X-Men. Written by Kurt Busiek it is described as “the most sprawling series to ever hit the Marvel Universe and is a sequel to a series from 1995. Notably, neither feature any of the characters set to show up in the movie.

If you want an actual comic book that might inspire some events of The Marvels take a look at The Ultimates. The 2015 run of The Ultimates brought together Blue Marvel, Captain Marvel, Spectrum, and Miss America. Xochitl Gomez, who will debut as America Chavez in Doctor Strange in the Multiverse of Madness is rumored to make a cameo – perhaps to team up with Ms. Marvel and set up the Young Avengers.

What will The Marvels Plot Be?

Other rumors for The Marvels include that it will set up a future A-Force film, involving a team of all-female Avengers organized by SWORD. But not much is known about the plot of The Marvels yet, so it’s all rumored fan theories at the moment.

Based on the events of WandaVision we know that bringing Monica and Carol back together will be a bumpy experience. There has clearly been some love lost between Lieutenant Trouble and her mentor. This will most likely be juxtaposed by Kamala who idolizes Captain Marvel, enough to take Ms. Marvel as her superhero portmanteau.

We know The Marvels will jump Captain Marvel’s story up to the present day, and it has been described as “cosmic”. Monica was recruited by a Skrull at the end of WandaVision, so she could join up with Captain Marvel in space but it’s doubtful that Kamala will find her way to outer space by the end of her original series. So the best bets are that The Marvels will find its way back to Earth to bring her into the fold.

Other rumors for the film include a Valkyrie (Tessa Thompson) cameo since the two actresses have previously teased a secret project together – though they could have meant a Captain Marvel cameo in the upcoming Thor: Love and Thunder.

Other fan theories are hoping to see the X-Men Rogue show up since Rogue and Captain Marvel have a history in Marvel Comics. Rogue once absorbed so much of Captain Marvel’s powers – leaving her in a coma for years – and Carol’s presence in Rogue’s body then took over her mind. The result of putting Carol’s mind back in her own body left her traumatized and she became an alcoholic for some time.

But for now, everything is a rumor, so come back here for more news on Captain Marvel as it develops.

Let us known in the comments below if you are existed for The Marvels to hit theaters next November!