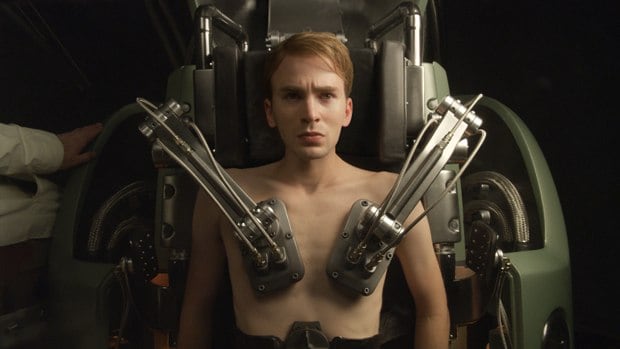 The Marvel Cinematic Universe has recently added to their roster of superheroes with the team in Eternals (2021). The Eternals are semi-immortal, celestial-made beings that spawned during the Stone Age on Earth in order to protect mankind from its biggest enemy, the Deviants.

Related: How Powerful are Eternals in the Marvel Universe?

Thena, played by Angelina Jolie (Maleficent, The Smiths, Girl, Interrupted, Changeling), the leader of the Eternals team, is both a scholar and warrior. One of Thena’s abilities is to make weapons appear out of nowhere, and this skill can certainly come in handy during any quarrel.

Marvel Studios producer Nate Moore said in an interview with ComicBook.com that Thena could actually be compared to Captain America and acknowledged whether the character could even take on the incredibly powerful Carol Danvers/Captain Marvel (Brie Larson).

With Thena front and center in a lot of the marketing campaigns surrounding the film, a lot of people wonder if we’ll get to see her tangle with Captain Marvel. According to the producer, that conflict would be quite the scrape, but fans shouldn’t count out Carol Danvers, even against an opponent that got their powers from the Celestials themselves.

We’ll have to wait and see just how Thena compares to Captain America once Eternals hits theaters on November 5, 2021.

The official description for Eternals from Marvel Studios is as follows:

Marvel Studios’ Eternals features an exciting new team of Super Heroes in the Marvel Cinematic Universe, ancient aliens who have been living on Earth in secret for thousands of years. Following the events of Avengers: Endgame, an unexpected tragedy forces them out of the shadows to reunite against mankind’s most ancient enemy, the Deviants.

After the events that took place in Marvel’s Avengers: Endgame (2019), Steve Rogers/Captain America (Chris Evans) gave up his shield so he could live out his life with his beloved Peggy Carter (Hayley Atwell).

Now, we have a new Captain America.

Related: Marvel’s Anthony Mackie Was Punched in the Jaw By Will Smith

As Marvel’s Phase Four continues, actor Anthony Mackie (Sam Wilson/Falcon) — who finally officially took up Cap’s shield in The Falcon and The Winter Soldier with fellow MCU star Sebastian Stan (Bucky Barnes/Winter Soldier), has become the new Captain America. Before becoming an Avenger, Mackie starred in movies such as 8 Mile (2002) and The Hurt Locker (2008).

Mackie explained how grateful he is for such a monumental opportunity:

“…The idea of being the title character in a Marvel movie, there’s no words to describe that, especially as a Black actor. Black actors don’t get those opportunities. And to have that opportunity, for all the work that I had to do, the 11 years of training, all the stuff that I had to do to get here, it would be a monumental feat.”

Malcolm Spellman’s Captain America 4 will reportedly begin production in May 2022 and is set to take place after the original three Captain America movies as well as the Disney+ Original series The Falcon and The Winter Soldier. Marvel has yet to reveal a description of the film.

Are you excited for Phase Four of the Marvel Cinematic Universe? Let us know in the comments!