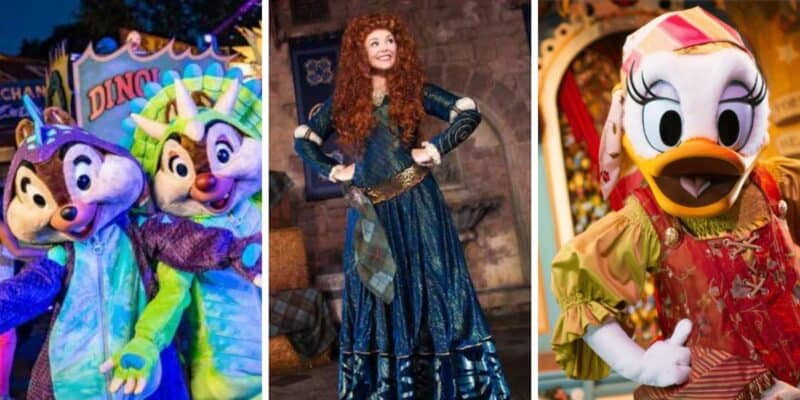 When Disney World reopened in July 2020, they brought along some reimagined ways for Guests to spot characters, including on pop-up cavalcades at the theme parks and other surprise appearances of characters frolicking around, such as Joy and Pooh in the fields at EPCOT or Pooh and friends at Crystal Palace in Magic Kingdom.

However, as the world fights the ongoing pandemic, Disney brought socially distanced meet and greets and socially distanced character dining back to the Parks. In addition, Disney is beginning to do away with social distancing as Disney Guests can once again hug Mickey Mouse and friends.

Now, Disney World is bringing back even more of the character meet and greets, including some fan-favorites from pre-pandemic.

Prior to the pandemic, Guests visiting Walt Disney World were able to meet characters around the Parks, including Princesses such as Jasmine and Merida as well as friends of the Fab 5 such as Minnie, Daisy, Donald, and Goofy. Due to the pandemic, these offerings disappeared, but the good news is Disney has just announced they will be returning soon!

Over at Magic Kingdom, Guests can once again meet Aladdin, Jasmine, Pooh, Tigger, Merida, and friends at Storybook Circus (including The Great Goofni): Per Disney Parks Blog:

We have even more fun, hugs and memories on the horizon. In the coming months, a visit to Magic Kingdom Park will bring chances to meet Aladdin, Jasmine, Merida, Pooh, Tigger and Storybook Circus pals like The Great Goofini in Pete’s Silly Sideshow.

If you are visiting Disney’s Hollywood Studios or Disney’s Animal Kingdom, meet and greets are returning there as well. Per Disney Parks Blog:

Your favorite toys will be ready for playtime in Toy Story Land at Disney’s Hollywood Studios, and Donald Duck and friends will rejoin their prehistoric party at “Donald’s Dino-Bash!” in DinoLand U.S.A. at Disney’s Animal Kingdom Theme Park.

Are you excited to see Disney World bring back character meet and greets? Let us know in the comments below.