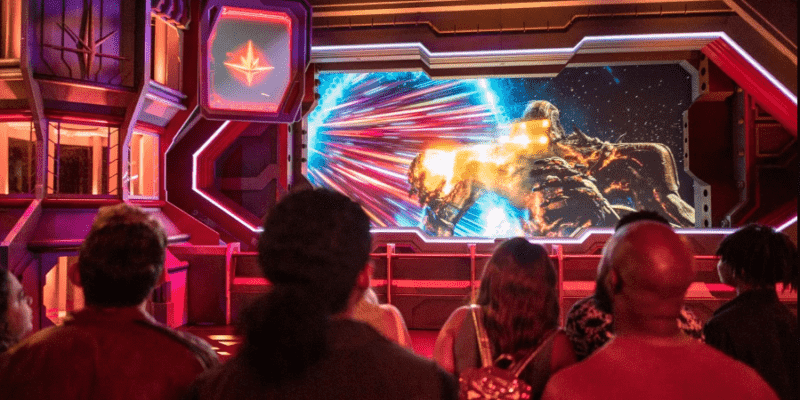 Walt Disney World Resort’s newest ride — the Guardians of the Galaxy: Cosmic Rewind roller coaster — has been thrilling Guests ever since Annual Passholder previews began on May 8, 2022.

The ride, which is based on the Marvel Cinematic Universe’s Guardians of the Galaxy franchise, officially opened on May 27, 2022 and EPCOT Park visitors have been clamoring to get a spot in the virtual queue.

One Guest who got lucky enough to ride last week recently took to Reddit to share an unfortunate tale about fracturing their foot on the new Disney thrill ride.

DAE [Does anyone else] feel a little too wobbly after GOTG: Cosmic Rewind to be navigating 3 flights of stairs in the exit?

Other Guests confirmed that they and their families also felt woozy leaving the high-speed ride, with u/nbrazelton saying, “My wife almost puked last weekend after having to go up the stairs haha.”

Other Guests were curious about how the OP broke their foot on the ride. The Redditor responded by sharing the tale, which isn’t as dramatic as one might expect, “Yup, just my luck! Missed the bottom step of the last flight and fell.”

This is the first known injury on Guardians of the Galaxy: Cosmic Rewind, which is the first Marvel-themed ride at Walt Disney World Resort.

Licensing issues prevent certain Marvel characters from being used at Disney’s Florida theme park property. The same restrictions do not apply in California, where the MCU-inspired Avengers Campus can be found at Disney California Adventure Park.

The Disneyland Resort area is home to two Marvel-centric attractions — Guardians of the Galaxy – Mission: Breakout! and the new WEB SLINGERS: A Spider-Man Adventure.

More on Guardians of the Galaxy: Cosmic Rewind

Related: Chris Pratt Stirs Up the Internet AGAIN With Another “Yikes” Post

The official description of the Guardians ride reads:

This family-thrill attraction features the first ever reverse-launch on a Disney coaster and is one of the largest fully-enclosed coasters in the world! A new innovation from Walt Disney Imagineering—this coaster rotates 360 degrees so you can focus on the action!

Begin your adventure by touring the Galaxarium—a planetarium-like exhibition showcasing the similarities and differences between Xandar and Earth’s galaxies. You’ll even get to discover some of the incredible wonders of Xandar and learn about their technology.

Just as you are about to reach the culmination of the tour, everything goes sideways, and you are called into action to help the Guardians of the Galaxy. Join Rocket, Groot, Gamora, and Star-Lord on an urgent mission where you’ll rewind, rotate and head towards the action through an exciting space pursuit.

Ready for an awesome quest across the cosmos to save the galaxy? It’s all up to you!

Have you ridden Cosmic Rewind yet?