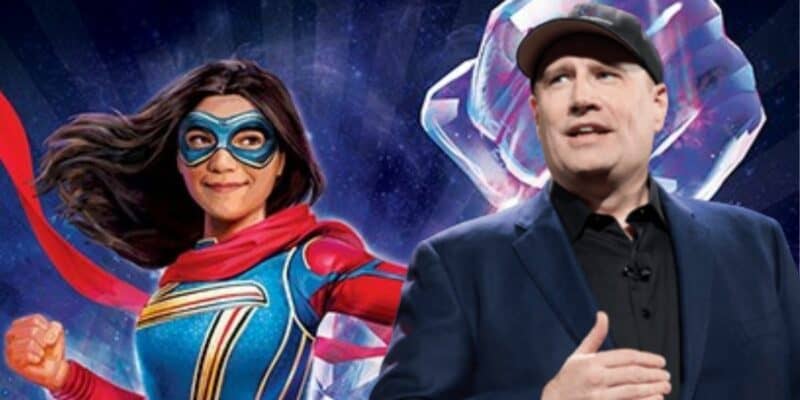 Much of Marvel’s Phase Four has been a massive success. Kevin Feige has ushered in a new era for Marvel Studios post-Avengers: Infinity War (2018) and Avengers: Endgame (2019). And the Marvel Cinematic Universe has reached new heights in television with WandaVision, Falcon and the Winter Soldier, Loki, and Hawkeye. But Marvel fans have had nothing but issues with the next original series coming to Disney+, Ms. Marvel.

The series will star newcomer Iman Vellani as Kamala Khan, AKA Ms. Marvel. A new rumor surrounding the trouble production comes from Ms. Marvel News on Twitter, who reported that the Ms. Marvel series will begin reshoots later this month, saying:

“According to Atlanta Filming, Ms. Marvel reshoots have begun in Atlanta, GA. […] CORRECTION: they have not begun *yet* but will start in a week or two.”

🚨 CORRECTION: they have not begun *yet* but will start in a week or two. https://t.co/Xv8qwzuZxC

This comes on the heels of a recent announcement the Ms. Marvel series has been delayed for a second time. It was initially scheduled to come out before Hawkeye began streaming on Disney+. Due to the extensive special effects, the first series starring a Muslim superhero was pushed back to early 2022. Now it has been delayed to the end of the year.

Sana Amanat, one of Kamala Khan’s co-creators, has called the pressure of the series “intense.” Some of that intensity has come from fans who have made the hashtag #FixMsMarvel trend on Twitter, following much of the news from behind the scene of the series. This includes casting non-Muslim actresses and the controversy surrounding Marvel Studios’ decision to change Ms. Marvel’s powers.

Many fans are hoping that these reshoots will fix some of the problems they have with the series, but only time will tell as Marvel Studios has neither confirmed that these reshoots are happening nor what they could be for. It could be for something small like a cameo, like the Doctor Strange in the Multiverse of Madness (May 6, 2022) reshoots.

They could add Brie Larson as Carol Danvers AKA Captain Marvel, or Teyonah Parris as SWORD Agent Monica Rambeau. The three characters are set to meet in The Marvels on February 17, 2023. The Captain Marvel (2018) sequel will bring back the three female superheroes, who have all gone by Marvel in some form or another in the comic books.

What is the controversy surrounding Ms. Marvel?

The biggest issue is the decision for the MCU to give the Pakistani-American a brand-new set of powers that are different from her Marvel Comics powers. In the comic book, Kamala is traditionally an Inhuman who gained polymorph or shapeshifting abilities from exposure to the Terrigen Mist, called morphogenetics.

A central plot of her debut in Ms. Marvel (2014) by writer G. Willow Wilson, Sana Amanat, and Adrian Alphona was her shapeshifting into Captain Marvel due to her internal baizes making her feel as though a young woman of color from Jersey City, New Jersey could not be a superhero. She has spent her life idolizing heroes like Captain America and Iron Man. She learns that who she is, is exactly what makes her a great heroine.

This has all been thrown out the window in her new series, which has changed her powers to glowing constructs. Seemingly this is to make her more like Captain Marvel and less like Reed Richards AKA Mister Fantastic. Mr. Fantastic has a similar stretching ability and is set to make his MCU debut in Jon Watt’s Fantastic Four reboot.

However, these changes are far from the only issues fans have with the series. It has also cast Yasmeen Fletcher (Upside-Down Magic), a half-Caucasian Christian actress, as Kamala’s friend, Nakia Bahadir (a Turkish Muslim who wears a hijab). Yasmeen Fletcher recently had to delicately address her role on the red carpet for Spider-Man: No Way Home (2021).

Additionally, Zenobia Shroff (The Big Sick) is a non-Muslim Indian actress set to play Kamala Khan’s mother, Muneeba Khan. Aramis Knight (Into the Badlands), who will be playing Kareem AKA Red Dagger, also got some pushback for being white-passing. It is doubtful that any reshoots could be to recast major actors.

Related: Scarlett Johansson Reveals How She Feels Returning to Marvel

More on the Ms. Marvel series

Let us know in the comments if you think Marvel Studios should use these reshoots to change Ms. Marvel’s powers.