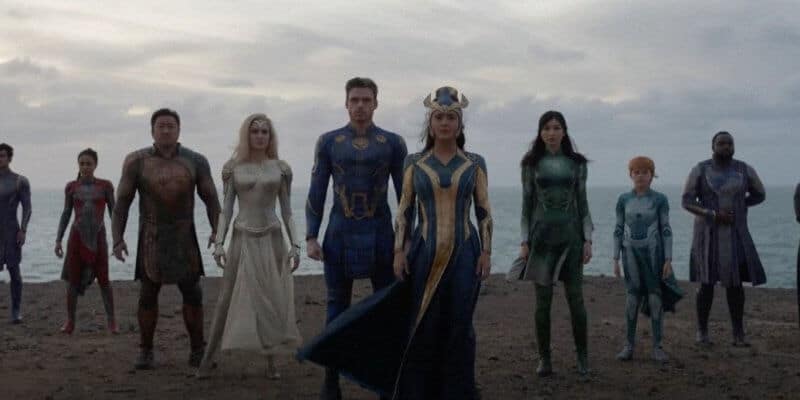 Marvel Studio’s next Phase Four film Eternals is set to hit theaters on November 5, 2021, and will break new ground for the Marvel Cinematic Universe. And Marvel fans can hardly be blamed for being unable to keep track of the expansive cast list which introduces more than a dozen new characters to the MCU.

Related: Marvel Confirms Over 30 Projects in the Works

Marvel’s Eternals will span the entire length of the Marvel Universe and explore the untapped history of the MCU by following the immortal superheroes known as the Eternals who have been hiding in the background all this time. Thus, the next Marvel movie coming from director Chloe Zhao (Nomadland) will bring in a slew of new faces.

Marvel fans will meet a new family of superheroes and that includes Angelina Jolie as Thena, Richard Madden as Ikaris, Gemma Chan as Sersi, Salma Hayek as a gender-swapped Ajak, Kumail Nanjiani as Kingo, Ma Dong-Seok as Gilgamesh, Barry Keogah as Druig, Lia McHugh as a gender-swapped Sprite, Brian Tyree Hendry as Phastos, and Lauren Ridloff as a gender-swapped Makkari.

Eternals will also introduce Kit Harrington as Dan Whitman AKA Black Knight and Haaz Sleiman as Phastos’s currently unnamed husband. The team of Eternals will face off against the villain Kro (heavily rumored to be voiced by Dan Stevens).

Related: Who Are the Eternals in the MCU?

It sure is a lot of people to keep track of. Eternals will bring in some of the strongest heroes from Marvel Comics. The Eternals are an offshoot of humanity created by the Celestials and given tremendous cosmic powers. Though each Eternal expresses these powers differently, for example, Ikaris can fly and Makkari can run at super speed.

Their introduction raises the question of where they have been all this time and why did none of these heroes step in to stop Thanos (Josh Brolin) in Avengers: Infinity War (2018) and Avengers: Endgame (2018). The answer is that the Celestials tasked them with protecting humanity from one very specific threat and from only that threat – the Deviants.

Who are the Villainous Counterparts of the Eternals?

The Deviants are another variation of humanity created by the Celestials. The Deviants had an unstable genome and went into hiding in caves on Earth and formed a city called Lemuria. The monstrous creatures seen in the Eternals trailer are different from the humanoid threatening villains from Marvel Comics.

Because of their mutated genomes, they vary wildly in appearance. Many Deviants have physical deformities. They were not given the same cosmic powers as the Eternals though some mutated and gained special abilities.

The only Deviants revealed in the trailer for Eternals has some appearing more like animals. The Eternals are seen fighting off flying creatures who could be the Deviants in the film. Though there is one who appears alongside Angelina Jolie’s Thena in a humanoid form – Kro.

The Deviants are led by General Kro. Unlike other Deviants, Kro has the power of malleability. This allows Kro to shapeshift his physical body into all sorts of shapes. However, the power is limited as he cannot significantly change the shape of his skeleton and he cannot change his overall size. This power could be the reason he appears distinctly different from the other Deviants in Eternals.

In Marvel Comics, Kro used this ability to grow closer to the Eternals and became a secret lover of Thena. Their relationship was the only connection between the two competing races for much of Marvel history.

Kro has carefully guarded the secret of his longevity by taking periodic sabbaticals from his kinsmen, for fear that he would be subjected to genetic experimentation by those who wished to possess this mutant trait themselves.

While Marvel Studios has not officially announced who will be voicing Kro, it is highly suspected that this is Dan Steven’s unnamed role. Dan Stevens recently teased Collider saying he had “Kro-comment” about his place in the Eternals cast.

Differences Between the MCU Eternals Cast and the Comic Book Characters

Eternals has the most diverse cast of any Marvel movie to date. And this is not how these characters originally first appeared in Marvel Comics. Except for Gemma Chan’s Sersi and Angelina Jolie’s Thena the rest of these characters are male in the comics. Salma Hayek’s Ajak, Lia McHugh’s Sprite, and Lauren Ridloff’s Makkari were all gender-swapped for the film.

Makkari was also changed to become Marvel’s first deaf superhero. And Phastos was confirmed to be gay in the film, which is a change from his comic book counterpart. Other changes include Kingo becoming a Bollywood star in India instead of a Japanese samurai.

All these changes breathe new life into a comic book series that most MCU fans had never heard of before. Director Chloe Zhao and her visionary take on Jack Kirby’s creations shows that Marvel Studios President Kevin Feige’s commitment to shaping the MCU to reflect its fans.

And fans have waited long enough. It’s been over a decade since Iron Man (2008) starring Robert Downey Jr. kicked off the biggest franchise. And MCU studio delays from the pandemic have had left some Marvel fans impatient for the next chapter of the Marvel Cinematic Multiverse.

How Other MCU Characters are Related to the Eternals

One character many Marvel fans hope to see again is Thanos (Josh Brolin). In Marvel Comics he was a Deviant. Though this was recently retconned. His father Mentor (A’Lars) and Sui-San were Eternals and wanted to have a child, which Eternals cannot have. So, they experimented with their genetics to create Thanos, who went mad and killed them.

There are other beings in the MCU who could pop up in Eternals as it jumps through time. For example, no one knows for sure how old Tilda Swinton’s Ancient One really is. The same goes with the villain of Shang-Chi and the Legend of the Ten Rings – Tony Leung’s Wenwu AKA Mandarin.

And it was previously confirmed that Asgardians like Odin (Anthony Hopkins), Thor (Chris Hemsworth), and Loki (Tom Hiddleston) came to Earth in the past. Other immortal cosmic beings like the Collector (Benecio del Toro) are aware of the Celestials as he introduced them in Guardians of the Galaxy (2014).

Related: Marvel Should Bring “Spider-Ham” Peter Porker Into the MCU

The cast of Eternals is sure the rock the MCU to the core. Fans certainly have high expectations that the new Marvel movie will set itself apart from every film that came before it.

Let us know in the comments which actor you are most excited to see in Marvel’s Eternals.