Marvel Studios’ next release Moon Knight coming to Disney+ on March 30, 2022, but it is easily being overshadowed by Marvel’s next Phase Four release of Doctor Strange in the Multiverse of the Madness (May 6, 2022). The Marvel Cinematic Universe’s next blockbuster is set to break the Marvel Multiverse as Moon Knight sets the stage for a darker, grittier, and grounded Marvel Universe starring Oscar Isaac (Star Wars) as Marc Spector/Steven Grant/Moon Knight.

Back when Oscar Isaac was cast as the titular Moon Knight fans began to wonder if the MCU would erase Marc Spector’s Jewish heritage. Marc is the son of a rabbi, who would go on to fight anti-semites and become an atheist – despite also believing he is the fist of Khonshu, the Egyptian God of the Moon.

Now, Alan Zelenetz who wrote Moon Knight (1985) and helped established Marc Spector as a Jewish superhero has said it does not matter if Marvel Studios erases that in the MCU. He told Jewish-American outlet The Forward:

“They’re certainly not bound by any origins. All of a sudden the Jews need to be represented. Moon Knight has to be Jewish — ‘Oh, we’re watching Marvel! The boycott is around the corner.’ I can smell blood in the water already! ‘How could they not make him Jewish? Oscar Isaac is not Jewish, even though he has the name ‘Isaac.’ And they’ve got an Egyptian director — what’s going on here?'”

It may be easy for Alan Zelenetz to give the okay to Kevin Feige to make any changes to the character. But Moon Knight belongs to more artists and writers and fans than him. Moon Knight was created by writer Doug Moench and artist Don Perlin, the character first appeared in Werewolf by Night #32 (1975).

And Moon Knight is by far the first time that the Marvel Cinematic Universe has drawn criticism for erasing Jewish culture. Baffling considering that the Marvel Comics it is based on was founded by Jewish artists like Stan Lee, Jack Kirby, and Steve Ditko.

Wanda Maximoff/Scarlet Witch (Elizabeth Olsen) had both her Jewish and Romani heritages completely ignored in the MCU. Even Peter Parker/Spider-Man (Tom Holland) was confirmed Jewish in Marvel Comics but it is never mentioned in any of his MCU appearances in Captain America: Civil War (2016), Spider-Man: Homecoming (2017), Avengers: Infinity War (2018), Avengers: Endgame (2019), Spider-Man: Far From Home (2019), and Spider-Man: No Way Home (2021). No Way Home featured three versions of Peter Parker with the additions of Tobey Maguire and Andrew Garfield, none confirmed as Jewish. 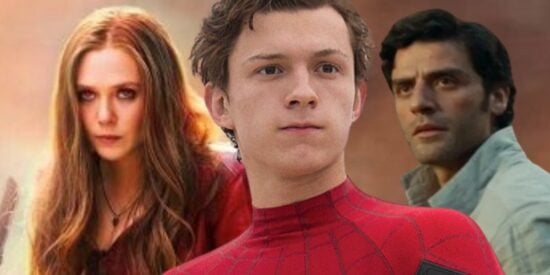 And Marvel fans care more than Alan Zelenetz does. Neil Kleid, who worked on Spider-Man: Kraven’s Last Hunt (2015) shared his disappointment on Twitter:

“But what’s worse is when a guy like #AlanZelenetz comes along—a Jew himself!—and says “oh, who cares?” I’ll tell you, Alan: my kids, who’ve seen every MCU film/show, waiting to see themselves represented on screen, in a toy, a costume they can wear. Don’t remove our Jewish heroes”

But what's worse is when a guy like #AlanZelenetz comes along—a Jew himself!—and says "oh, who cares?" I'll tell you, Alan: my kids, who've seen every MCU film/show, waiting to see themselves represented on screen, in a toy, a costume they can wear. Don't remove our Jewish heroes

Zelenetz seems concerned that “woke” Marvel fans will try to cancel Oscar Isaac for playing a Jewish character. But there have been no organized boycotts over his casting. Isaac is Jewish on his father’s side and for many fans, they were more excited for the MCU to finally bring Moon Knight to Disney+ authentically.

Related: Actor “Excited” to Replace Sam Wilson in the MCU

The next Marvel original series is coming in March. It is expected to have a tone more similar to Marvel’s Netflix shows like Daredevil, Jessica Jones, and Luke Cage. It will be rated TV-14 and co-star Ethan Hawke as Arthur Harrow. Directed by Mohamed Diab the official description of the series reads:

“Moon Knight follows Steven Grant, a mild-mannered gift-shop employee, who becomes plagued with blackouts and memories of another life. Steven discovers he has dissociative identity disorder and shares a body with mercenary Marc Spector. As Steven/Marc’s enemies converge upon them, they must navigate their complex identities while thrust into a deadly mystery among the powerful gods of Egypt.”

The next Marvel Studios releases are Ms. Marvel in Summer 2022, and She-Hulk to debut this year. In theaters, Doctor Strange In the Multiverse of Madnesscomes out on May 6, followed by Thor: Love and Thunder on July 8, Black Panther: Wakanda Forever on November 11.

Let us know in the comments if you agree with Moon Knight writer Alan Zelenetz.