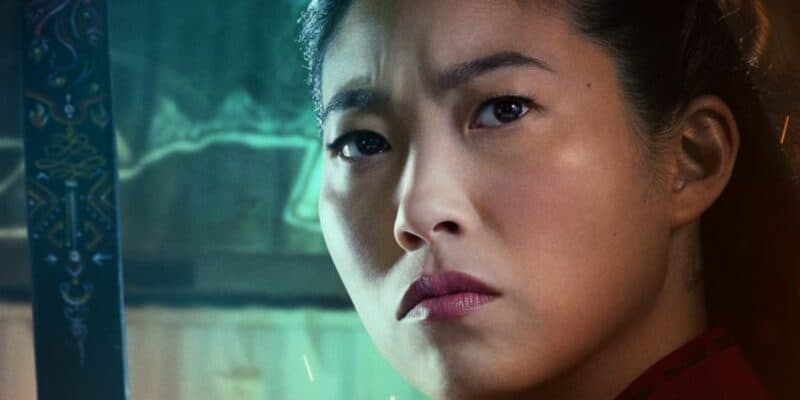 Shang-Chi and the Legend of the Ten Rings is set to break new ground for the Marvel Cinematic Universe when it hits theaters on September 3, 2021. The first nearly all-Asian American cast for Marvel Studios has recently been overshadowed by the Spider-Man: No Way Home (2021) trailer and the latest superhero film has been called an “experiment” by the Disney CEO, which had led to some conspiracy theories that Marvel Studios is not giving the Marvel film its due.

Awkwafina recently sat down with The Hollywood Reporter to talk about her audition for ­Shang-Chi and the Legend of the Ten Rings and her experience meeting the star Simu Liu (Shang-Chi) for the first time.

“I remember testing with Simu that day, and he was nervous. I was nervous, too. I was like, ‘I hope I don’t get fired in the process of chemistry reading’.”

She was the first person cast for the next movie coming in Marvel’s Phase 4, and Simu Liu was not cast as Shaun/Shang-Chi until near the end of the casting process. However, since the Golden Globe Award-winning actress was cast, she has faced an uphill battle while promoting the film.

Recently, a 2017 interview Awkwafina did with Vice resurfaced and went viral. During the interview from a few years ago, Awkwafina (whose real name is Nora Lum, as Awkwafina is a stage name) said:

“I refuse to do accents. I’m not OK with someone writing the Asian experience for an Asian character. I make it very clear, I don’t ever go out for auditions where I feel like I’m making a minstrel out of our people.”

Now, some Marvel fans are planning a boycott of the film as they accuse star Awkwafina (Katy) of cultural appropriation, claiming she has built her career on a “blaccent”. “Blaccent”, a blend of the words Black and accent, is the imitation of African American Vernacular English by non-Black people. In the past, Awkwafina was critiqued for using a “blaccent” in the past, and many continue to point out the actress, comedian, and musician’s use of a “blaccent” throughout her career.

Fans took Twitter to lambast the actress for her use of a “blaccent,” and now many are planning on not seeing the film because of Awkwafina.

One example is this Tweet from Mia Tsai, who said:

“awkwafina won’t do accents but will drop rap songs in a “blaccent” and won’t apologize for using it for fame. got it … that’s an interesting word choice there. “minstrel””

awkwafina won't do accents but will drop rap songs in a "blaccent" and won't apologize for using it for fame. got it

Twitter user Virgo added that because of this they and many others will not being seeing the Marvel movie:

“no one is coming to see ShangChi, and Awkwafina is anti-Black with her appropriated Blaccent, as so many others have pointed out. No one is going to sit in a theater during a pandemic to watch her for two hours.”

You can take this down, because no one is coming to see #ShangChi, and Awkwafina is anti-Black with her appropriated Blaccent, as so many others have pointed out. No one is going to sit in a theater during a pandemic to watch her for two hours.

It is worth noting that similar accusations of culture appropriate were lobbied against the Asian American actress when she voiced the dragon Raya in Raya and the Last Dragon, currently available on Disney+ and made 122.7 million USD at the Box Office despite being released directly on the streaming platform’s Premier access, similar to Black Widow.

“awkwafina and her Blaccent will be the reason I don’t go and see shangchi  I just don’t feel comfortable with her overt cultural appropriation. #ShangChi #culturalappropriation #blaccent

@awkwafina and her Blaccent will be the reason I don’t go and see @shangchi I just don’t feel comfortable with her overt cultural appropriation. #ShangChi #culturalappropriation #blaccent

However, co-star actor Simu Liu, who plays the Master of Kung Fu in Shang-Chi, has had nothing but kind words for Awkwafina and has thanked her for her kindness on set, saying:

“I mean it was like imposter syndrome every single day. […] Truly it was-it was such a such a treat and, uh, it was all I could do just not to mess it up, you know.  Um, when I was first cast, I did my final screen test with Nora, and she did such like a wonderful job of putting me at ease.”

Other fans have come out on Awkwafina’s side, stating that her “blaccent” is actually a typical Queens accent. Awkwafina was born Nora Lum on June 2, 1988, just out of New York in Stony Brook, Long Island, and she has dramatized her experience in the critically acclaimed Awkwafina is Nora from Queens, which is currently airing on Comedy Central.

“False! She isn’t doing a “black accent” Fact! Her name is awkwafina and she’s from Queens and that’s how she actually talks….get a grip people.”

False! She isn’t doing a “black accent”
Fact! Her name is @awkwafina and she’s from Queens and that’s how she actually talks….get a grip people https://t.co/8ensQw30tM

This comes both at a time when the United States has experienced a rise in hate crimes against Asians and as the Delta variant of the COVID-19 virus has cases rising and fans are more reluctant to head to theaters.

“Well I’m sure as heck not going to a theater with Delta Covid, not that I could anyway since all the local theaters went out of business this past year. Fortunately I’m not concerned with Shang-Chi spoilers and can just wait an extra month and a half to see it.”

Well I'm sure as heck not going to a theater with Delta Covid, not that I could anyway since all the local theaters went out of business this past year. Fortunately I'm not concerned with Shang-Chi spoilers and can just wait an extra month and a half to see it. https://t.co/0KPlhIAZFF

Disney made the decision not to a simultaneous Disney+ and theatrical release with Shang-Chi  after the controversy that followed their release of Black Widow (2021) starring Scarlett Johansson as Natasha Romanoff AKA Black Widow. Johansson is currently suing Disney for “cannibalizing” ticket sales by releasing it on the Disney+ streaming service the same day Black Widow came out in theaters.

Marvel Studios officially describes Shang-Chi and the Legend of the Ten Rings as:

“Marvel Studios’ “Shang-Chi and The Legend of The Ten Rings” stars Simu Liu as Shang-Chi, who must confront the past he thought he left behind when he is drawn into the web of the mysterious Ten Rings organization. The film also stars Tony Leung as Wenwu, Awkwafina as Shang-Chi’s friend Katy and Michelle Yeoh as Jiang Nan, as well as Fala Chen, Meng’er Zhang, Florian Munteanu and Ronny Chieng.”

Directed by Destin Daniel Cretton and head writer David Callaham, the latest entry in the MCU signals that Marvel boss Kevin Feige is committed to increasing the diversity in the Marvel Universe as it expands to the new Marvel Multiverse. Awkwafina is also due to voice Scuttle in the live-action adaptation of the Little Mermaid.

She recently took to Twitter to swear off social media following death threats she received from Marvel fans. She shared a series of images expressing her regret over how fans were hurt by her use of black culture saying it was never her intention to be anything but her authentic self, saying:

“There is a sociopolitical context to everything, especially the historical context of the African American community in this country. It is a group that is disproportionately affected by institutionalized policies and law enforcement policies – all the while having historically and routinely seen their culture stolen, exploited and appropriated by the *dominant* culture for monetary gain without acknowledgment nor respect for where those roots come from, the pioneers of its beginnings and the artists that perfected and mastered the craft.

It is a problem we still see today – though some may pass if off as convoluted mixture of the ‘internet TikTok slang generation’ that liberally uses AAVE, to add that hip hop – a genre of music that is ubiquitous and beloved across the country – has now anchored itself as a mainstream genre in music history. And in life, linguistic acculturation, immigrant acculturation, and the inevitable passage of globalized internet slang all play a factor in the fine line between offense and pop culture.

As a non-black POC, I stand by the fact that I will always listen and work tirelessly to understand the history and context of AAVE, which is deemed appropriate or backwards toward the progress of ANY and EVERY marginalized group. But I must emphasize: To mock, belittle, or to be unkind in any way possible at the expense of others is: Simply. Not. My. Nature. It never has and it never was.

My immigrant background allowed me to carve an American identity off the movies and tv shows I watched, the children I went to public school with, and my undying love and respect for hip hop. I think as a group, Asian Americans are still trying to figure out what that journey means for them – what is correct and where they don’t belong. And though I’m still learning and doing that personal work, I know for sure that I want to spend the rest of my career doing nothing but uplifting our communities. We do this first by failing, learning, acknowledging, hearing and empathizing… And I will continue, tirelessly, to do just that.”

Shang-Chi and the Legend of the Ten Rings is currently available on Disney+, and it has been confirmed that Shang-Chi will be getting a sequel, but it is not clear when the characters will return next. Perhaps Simu Liu and Katy will have cameos in Doctor Strange in the Multiverse of Madness (May 6, 2022) since they were last seen with the Sorcerer Supreme Wong (Benedict Wong).

Let us know if you are planning to see Shang-Chi in theaters.