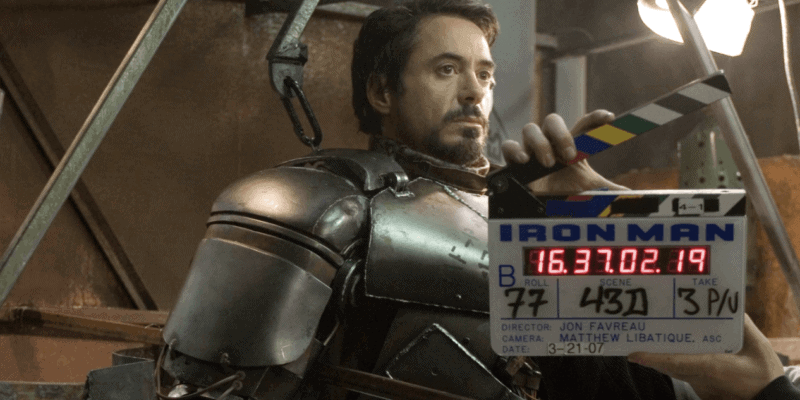 Robert Downey, Jr. was once known for little more than his drug addiction and wild lifestyle. Then, Marvel Studios boss Kevin Feige and his team gave the actor a chance that changed his life — and, ultimately, the MCU.

Related: Oscar Isaac Paves the Way For RDJ to Cross From Marvel to ‘Star Wars’

The pictures that accompanied the post showcased RDJ in one of the original incarnations of Tony Stark’s Iron Man suits and Feige giving direction to Gwyneth Paltrow (Pepper Potts) on set.

As it turns out, one of the most famous lines — if not the most famous line — from the first Iron Man (2008) movie wasn’t even in the script. At the end of the movie, Downey, Jr., as Tony Stark, tells the press, “I am Iron Man,” changing the way superheroes inherently functioned within Marvel.

No more were they hiding in the shadows, trying to conceal their real identities. RDJ’s improvisation gave Feige and the Marvel creative team leeway when it came to developing characters from Marvel comic books in other MCU movies. Furthermore, the “I am Iron Man” line became something of a hallmark of the Iron Man trilogy, appearing again in Iron Man 3 (2013) and, quite tragically, Avengers: Endgame (2019) during Stark’s death scene.

Related: RDJ Confirms Marvel Exit, “I’ve Done All I Could” With Iron Man

While we don’t know how Iron Man was originally supposed to end, it definitely wasn’t with Tony Stark outing his superhero persona to the public. And, yet, Feige and the production team left the line in the movie because it felt so quintessentially Tony.

Furthermore, it started the Marvel Cinematic Universe out on a completely unique road within the comic book film sector, allowing Marvel fans to connect to their favorite characters in a brand new way.

…the MCU began by ditching one of the biggest comic book tropes. The universe was launching at a time when Christopher Nolan’s Dark Knight trilogy was as popular as ever, the original Spider-Man franchise had just ended, and Fox was still figuring out where to take X-Men next. Secret identities play a big part in most of these superhero franchises, which is why it became all the more surprising for Iron Man to end with Tony Stark’s public reveal.

From there, the MCU grew into a superhero franchise that almost never deals with heroes with secret identities.

Perhaps most notable is the MCU’s decision to forego Thor’s (Chris Hemsworth) comic book alter-ego of Donald Blake entirely. From the start, we know that the Norse god of thunder is, in fact, the god of thunder. The same goes for Captain America (Chris Evans), whose identity as Steve Rogers was known even in the comic books, but is even further developed in Marvel’s movies.

As a result, the MCU did in a single film what took decades to accomplish in the comics in some cases, only the films never had to retcon these decisions to make the identities secret again.

This decision has allowed the Marvel Cinematic Universe to delve into deeper character development and more meaningful relationships between characters across the board — relationships aren’t saddled by one person holding onto a massive secret, an entire double life. This is part of what makes the MCU so enjoyable.

Now we know it’s all thanks to Robert Downey, Jr. doing what he does best — living life just a little bit off-script.

What’s next for RDJ?

Currently, online rumors are swirling that former Avenger Downey, Jr. is in talks with Mandalorian creator and showrunner Jon Favreau to join the Star Wars universe he’s creating on Disney+.

Most reports indicate that RDJ — whose last major film, Dr. Doolittle (2020) was a flop among critics — is being considered for the role of Grand Admiral Thrawn (voiced by Lars Mikkelsen in Star Wars Rebels), the villain who is likely going to appear in the upcoming Ahsoka spinoff series that will pick-up where Ahsoka Tano’s (Rosario Dawson) storyline left off in The Mandalorian Season 2, Episode 5 (“Chapter 13: The Jedi”).

Related: OpEd: Three Actors That Could Play Admiral Thrawn in ‘The Mandalorian’

At this time, Favreau, Mandalorian executive producer Dave Filoni, and Lucasfilm executives have yet to comment on whether or not Robert Downey, Jr. is being considered for a Star Wars role.

The Skywalker Saga officially ended with Star Wars: Episode IX – The Rise of Skywalker (2019) and the official new Star Wars slate of Disney+ shows includes 11 series that explore both new and familiar eras within the Star Wars universe, so there’s plenty of room for Downey, Jr. should he be in serious negotiations.

RDJ is also gearing up for Sherlock Holmes 3, which he is working on with wife and producer Susan Downey.

Would you like to see RDJ take on a galaxy far, far away? What do you think about the fact that his most famous MCU line was improvised while filming?