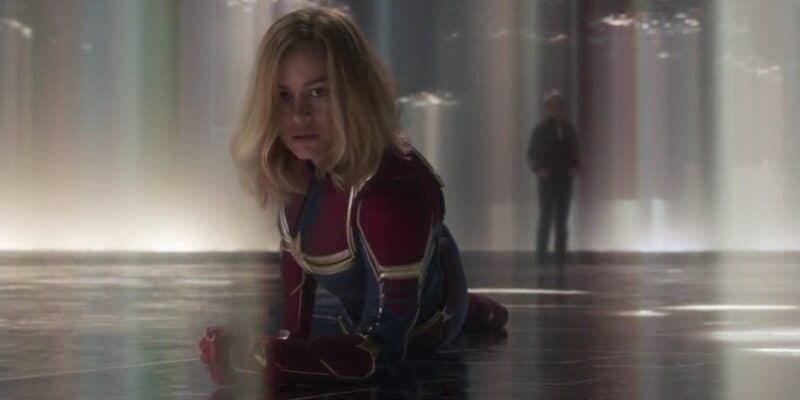 There are few more divisive Marvel Cinematic Universe stars than Brie Larson (Carol Danvers/Captain Marvel). Love her or hate her, though, Captain Marvel is one of — if not THE — most powerful super hero in the MCU.

Related: Actor “Excited” to Replace Sam Wilson in the MCU

And, in her time in the MCU so far, she has made her mark not only in the standalone Captain Marvel (2019) movie, but in the conclusion of the Infinity Saga, Avengers: Endgame (2019). Danvers was famously part of the all-female scene that also featured Pepper Potts (Gwyneth Paltrow), Valkyrie (Tessa Thompson), Wanda Maximoff/Scarlet Witch (Elizabeth Olsen), Mantis (Pom Klementieff), Shuri (Leticia Wright), Okoye (Dani Gurira), Gamora (Zoe Saldana), Nebula (Karen Gillan), and Hope Pym/the Wasp (Evangeline Lilly).

The actress also made a cameo appearance in the mid-credits scene of Shang-Chi and the Legend of the Ten Rings (2021) alongside Mark Ruffalo (Bruce Banner/Hulk) and Samuel L. Jackson (Nick Fury) who paged both of the super heroes via hologram.

With Larson’s next MCU appearance imminent in Captain Marvel 2 — officially titled The Marvels (2023) — it may seem odd to learn that Marvel has officially confirmed plans to kill the character.

In the Marvel Comics world, popular Marvel characters find themselves dealing with all manner of storylines that never make it into Kevin Feige’s MCU. Such is the case with the original male Captain Marvel — Mar-Vell’s — upcoming death.

Per one recent report:

If there’s one hero who can’t catch a break in Marvel Comics, it’s Mar-Vell, the original Captain Marvel. Few superheroes actually remain dead, but partly because his original passing was so iconic, Mar-Vell is stuck in a process of brief returns followed by repeated dirt naps, with the latest taking place in Silver Surfer Rebirth #2, from Ron Marz, Ron Lim, Don Ho, Israel Silva, and Joe Sabino.

Related: The “Entire Marvel Universe” Is Officially In Danger

Mar-Vell originally died in Jim Starlin’s iconic graphic novel, “The Death of Captain Marvel,” and was, oddly enough for a super hero, left deceased for about 26 years until “Secret Invasion” (2008). As the aforementioned article notes:

It was soon revealed, however, that it was a Skrull brainwashed to believe he was the real Mar-Vell, and the impostor soon died as well. The taboo was broken, however, and the real Mar-Vell was resurrected two times, once for the 2010 Chaos War event, and once during Avengers Vs. X-Men in 2012.

Now, however, Mar-Vell is about to die again, at the hands of Thanos, no less. In the preview for “Silver Surfer Rebirth #2,” Thanos stands next to the Fantastic Four antagonist on a seemingly barren planet, near Mar-Vell’s dead body.

At one point in the panels, the Mad Titan denies murdering Mar-Vell, telling the Silver Surfer, “Believe me, he was dead already.”

For now, fans will simply have to wait to read the issue to find out exactly what transpires. But, one thing is certain, Captain Marvel will die in the very near future.

As for Brie Larson’s Captain Marvel’s next appearance in the Marvel Cinematic Universe, an official description of The Marvels has not been released. We do know, however, that it will heavily feature a grown-up version of young Monica Rambeau, who appeared in Larson’s first solo film.

Teyonah Parris was introduced as adult Monica in Elizabeth Olsen and Paul Bettany’s WandaVision on Disney+ in early 2021.

One synopsis of the upcoming movie reads:

What do you think about Captain Marvel dying at the hands of Thanos?