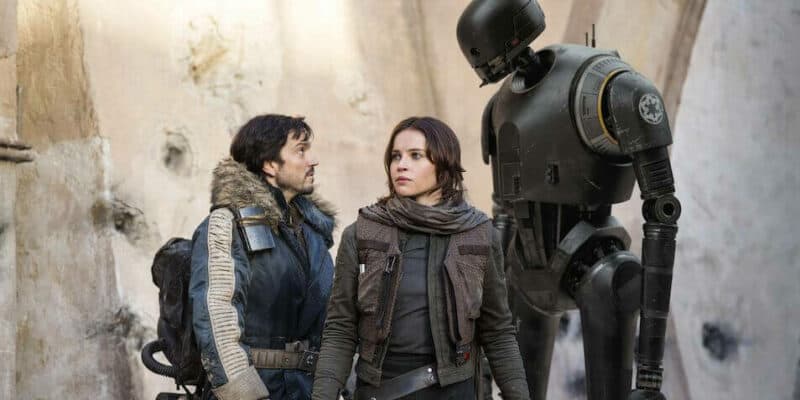 As August fast approaches, so too does Lucasfilm’s next live-action venture with Star Wars: Andor. The series which sees the return of Diego Luna’s Rebel spy, Cassian Andor, will also bring back other familiar faces, however, one will notably be missing. Now, a replacement has seemingly been confirmed.

Six years ago, Rogue One: A Star Wars Story (2016) was released in movie theaters. The standalone nature of the movie, even with such large connections to George Lucas’s original trilogy, refreshed the Star Wars universe with a slew of new characters. Felicity Jones headed up the large ensemble cast as Jyn Erso, where the actress was joined by Mads Mikkelsen as Galen Erso, Ben Mendelsohn as Imperial Orson Krennic, Donnie Yen as Chirrut Îmwe, Riz Ahmed as Bodhi Rook, Jiang Wen as Baze Malbus, Forest Whitaker as Cone Wars veteran Saw Gerrera, and Diego Luna as Rebel spy Cassian Andor.

The movie focused on the burgeoning Rebel Alliance as they attempted to steal the Death Star plans, and stunt Darth Vader and Emperor Palpatine’s Galactic Empire.

One favorite element from Gareth Edwards’ Rogue One was the companionship between Luna’s Andor, and former Imperial turned Rebel droid, K-2SO, voiced by Alan Tudyk. While Luna will, of course, return for his self-titled series, creator Tony Gilroy who penned the script for Rogue One with John Knoll, and Tudyk himself have already confirmed that K-2SO won’t return “yet”.

Reportedly, Andor was slated for five seasons, making it one of Lucasfilm’s largest projects to date. However, that was then allegedly shrunk to three (according to cinematographer Adriano Goldman), and now chances are Andor will run for two 12-episode seasons, according to Gilroy himself.

So, while there is no Tudyk yet, the door is open for a second season reprise. Gilroy, who replaced former Star Wars TV showrunner Stephen Schiff, revealed earlier this year that the two seasons of Andor will act as two halves of a novel, with the second taking viewers up to the events of Rogue One. Most episodes for the first Andor season are helmed by Toby Haynes.

Chances are Tudyk’s K-2SO will return to the Star Wars galaxy before the door closes on Andor, there has just been no confirmation yet. But, as with many Star Wars characters, and a legacy of over forty years to protect, every main character needs a companion, and a merchandise announcement has seemingly revealed K-2SO’s replacement for the next live-action Star Wars series.

The addition of a new droid isn’t surprising as Star Wars has a long history of implementing droid characters across their movies, television shows, novels, and video games.

It seems unlikely that Tudyk’s K-2SO will not return in the latter season of Andor, due to his star status in Rogue One. Unless there is a significant time jump between the finale of Andor and the beginning of Rogue One, fans should expect to cross paths with the former Imperial enforcer droid. That said, it was recently confirmed that every three episodes of the first season of Andor will cover one year of events — Andor takes place five years prior to Rogue One, acting as a prequel to the Star Wars movie.

Only those in the know at Lucasfilm will truly know what direction Andor will take the Star Wars galaxy in, and fans will join the story next month when the series commences on August 31, 2022. Andor stars Diego Luna (Cassian Andor), Genevieve O’Reilly (Mon Mothma), Stellan Skarsgård (Luthen), and Adria Arjona, Denise Gough, Fiona Shaw, Kyle Soller, David Hayman, and Robert Emms in currently undisclosed roles.

Are you looking forward to Andor this August? Let us know in the comments down below!