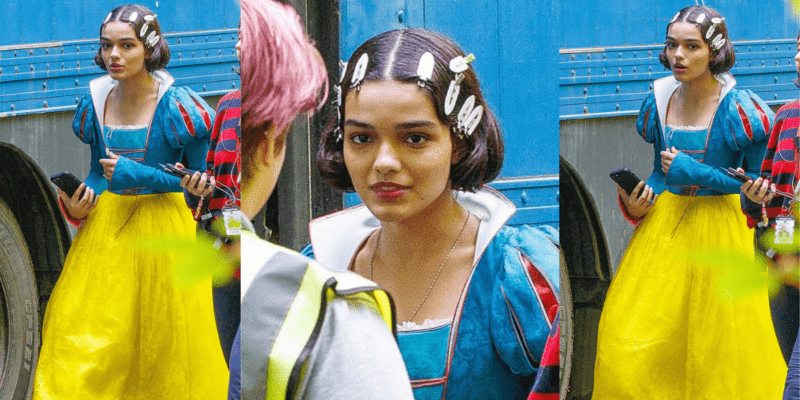 The first images of Rachel Zegler in character for her role as Snow White have surfaced as the 21-year-old actress began shooting scenes for the controversial live-action adaptation of Snow White and the Seven Dwarfs. The actress’s participation in this film has been controversial since her casting was announced, as many could not fathom a Latina actress being cast for a traditionally white character.

In the classic fairytale, Snow White is described as the “fairest one of all” with “skin as white as snow,” but director Marc Webb said Rachel’s casting had been perfect for the role thanks to the actress’s “strength, intelligence, and optimism.” In a statement to AFP, he said:

Rachel’s extraordinary vocal abilities are just the beginning of her gifts. Her strength, intelligence, and optimism will become an integral part of rediscovering the joy in this classic Disney fairytale.

In June, Rachel took to social media to celebrate the news and address hateful comments that questioned her casting as the classic Disney Princess. In a since-deleted Tweet, Rachel wrote, “yes i am snow white no i am not bleaching my skin for the role.”

The first images show Rachel on her way to the set in London while fashioning the traditional princess costume, a billowing gown with a cobalt blue suede bodice and puff sleeves attached to a canary yellow tulle skirt. While still not ready to film, as her hair was still held in place with several pins and she was wearing a pair of UGG boots, the accuracy of the costume left many viewers mesmerized and eager to see more of the actress’s performance.

However, many viewers were unhappy with these images, claiming the costume looked cheap and of poor quality, and reigniting the debate on Rachel’s casting, mentioning her skin should be lightened in the film’s editing, which would be a terrible thing to do. Other reactions mentioned Once Upon A Time, a polemic series created by ABC Studios, saying the costume felt like it came out of the show.

Disney recently faced similar reactions after announcing the cast for the live-action remake of The Little Mermaid, set to be released next year.

Disney’s new take on the classic Snow White and the Seven Dwarfs is set to star “West Side Story’s” Rachel Zegler as the titular character as well as Gal Gadot, famous for her portrayal of Diana Prince in the Wonder Woman franchise, who will be playing the Evil Queen. Disney commented the company is trying to take a different approach with Snow White’s seven companions after Game of Thrones actor Peter Dinklage criticized the studio for remaking a “backward” film that reinforces stereotypes.

The beautiful and kindhearted princess Snow White charms every creature in the kingdom except one — her jealous stepmother, the Queen. When the Magic Mirror proclaims Snow White is the fairest one of all, she must flee into the forest, where she befriends the lovable seven dwarfs — Doc, Sneezy, Grumpy, Happy, Bashful, Sleepy, and Dopey. But when the Queen tricks Snow White with an enchanted apple, only the magic of true love’s kiss can save her!

Are you excited about this live-action adaptation of Snow White? Let us know in the comments below!

Want to watch Disney classic movies, including Peter Pan (1953), Pinocchio (1940), Dumbo (1941), Snow White (1937), Fantasia (1940), and many more? What about Star Wars? Marvel Cinematic Universe? Disney+ is home to these stories and so many more! With the upcoming series of She-Hulk, What If…? Season 2, Echo, Ms. Marvel, and Agatha: House of Harkness, as well as Obi-Wan Kenobi, Chip ‘n Dale: Rescue Rangers, Baymax!, and Hocus Pocus 2, Disney+ will have Disney fans entertained for hours. Click here to watch today!