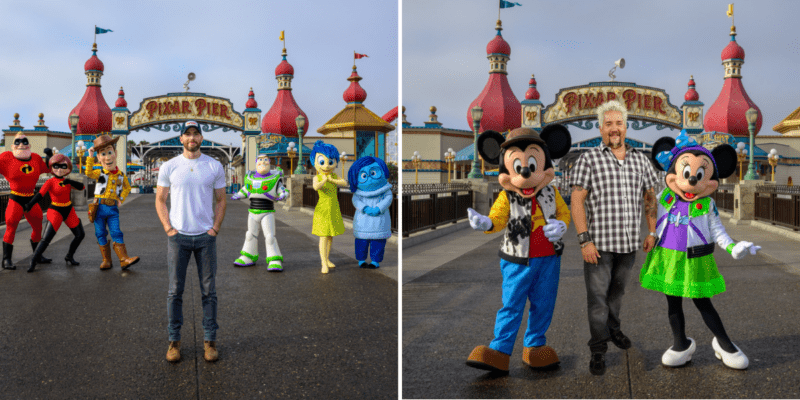 These images quickly went viral as many viewers claimed that Chris Evans was not at the Park and that he had been photoshopped into the pictures due to his “disciplined pose,” as he called it in a later tweet, promising he was not photoshopped in the pictures.

I promise I’m not photoshopped into these! I just have a very disciplined pose.

(And I don’t know what to do with my hands)

I promise I’m not photoshopped into these! I just have a very disciplined pose. 🤦🏻‍♂️

(And I don’t know what to do with my hands) https://t.co/oiVadwg3s7

Related: Chris Evans Speaks Out on “Not Photoshopped” Disneyland Photos

Chris even shared a video originally posted on the official Disney and Pixar’s Lightyear (@pixarslightyear) Instagram account, reassuring his followers and fans that he was, indeed, at the Parks for the photoshoot.

See?! I WAS there! 😂 pic.twitter.com/ttpLtpv7dd

After the internet had fun with these images, one celebrity decided to make a hilarious recreation of this controversial photoshoot, making the whole situation even funnier for Twitter users.

Mayor Guy Fieri (@GuyFieri) recently posted a few images of himself at Pixar Pier, recreating Chris Evans’s photoshoot, claiming that he had also been to the Park and was definitely not photoshopped in the pictures.

This is not the first time Guy Fieri has gotten himself involved with Disney Parks, as he opened a location of his restaurant, Chicken Guy, at Disney Springs in Walt Disney World Resort in 2018, giving Guests the chance to enjoy chicken tenders, salads, sauces, and more, bursting with Guy Fieri’s signature flare.

One-of-a-Kind Flavors
Satisfy your appetite with the rockin’ restauranteur’s irresistible quick bites—including all-natural chicken tenders, skewers, sandwiches and salads that can be paired with over 20 varieties of house-made sauces perfect for dipping, slathering or smothering. Crave-worthy sides, desserts and assorted beverages are also available.

Now Evans will play a new hero as he takes on the role of Buzz Lightyear for Pixar’s Lightyear, in which we will get to know the story of the space ranger that inspired Andy’s beloved toy Buzz Lightyear (Tim Allen) in Toy Story (1995).

Head to your favorite movie theater on June 17 to see the premiere of Pixar’s Lightyear, starring Chris Evans and directed by Angus MacLane. From Disney:

From Disney and Pixar comes an animated sci-fi action-adventure — the definitive origin story of Buzz Lightyear (voice of Chris Evans), the hero who inspired the toy. “Lightyear” follows the legendary space ranger on an intergalactic adventure alongside ambitious recruits, Izzy, Mo and Darby, and his robot companion Sox. As this motley crew embark on their toughest mission yet, they must learn to work as a team to escape the evil Zurg and his dutiful robot army who are never far behind.

Are you excited about Lightyear? Let us know in the comments below!