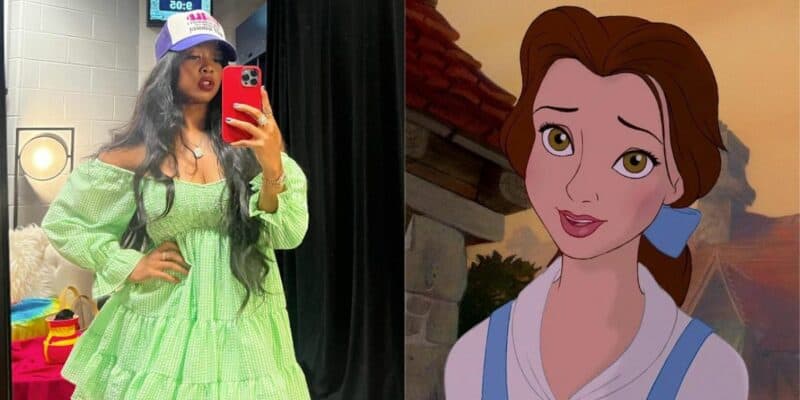 As one of The Walt Disney Company’s most influential and beloved properties, Beauty and the Beast (1991) is a true Golden Era movie of Disney Animation.

2017 saw the story of true love and a castle trapped in time make its way back to the big screen in Disney’s live-action remake, and now another actress will be stepping into the shoes of book-loving Belle as Grammy Award and Academy Award-winning musician, H.E.R., has been cast as the Disney Princess in a new movie coming this winter.

With classic songs like “Belle”, “Be Our Guest”, and “Beauty and the Beast (Tale as Old as Time)”, from Alan Menken and Howard Ashman, Disney’s 30th animated feature found small-town Belle whisked away to an enchanted castle owned by a monstrous beast. Many will know the story of Beauty and the Beast, as the tale has certainly become as old as time. The animated film made history, too, as Beauty and the Beast was nominated for Best Picture at the 64th Academy Awards.

Director Bill Condon brought Belle and Beast back to the big screen in the live-action adaptation of the movie. Beauty and the Beast (2017) saw Dan Stevens appear as Prince Adam/Beast and Emma Watson step into Paige O’Hara’s footsteps as this generation’s Belle, and became a box office hit with $1.2 billion netted globally. Then there is the multitude of stage adaptations touring various countries and the in-house Broadway-style show in Disney’s Hollywood Studios Theme Park at the Walt Disney World Resort.

In fact, the Beauty and the Beast story will once again whisk audiences away this year when a 30th anniversary special will air on ABC, the Disney-owned network, on December 15, 2022, at 8 p.m. ET, before airing on the Disney streaming service, Disney+, a day later. The Beauty and the Beast 30th anniversary event is described as a hybrid special, with the original July announcement stating the following:

The two-hour special will include live never-before-seen musical performances and feature brand-new sets and costumes inspired by the classic story. Each performance is created to pay homage while also adding to the iconic story for viewers at home. Songs from the original animated classic will be performed in front of a live audience at Disney Studios, though the special will not be shot live.

H.E.R. — real name Gabriella Sarmiento Wilson — will star as Belle in the hybrid special which is directed by Hamish Hamilton and Jon M. Chu executive producing. She said on her casting (via Variety):

“I can’t believe I get to be a part of the ‘Beauty and the Beast’ legacy,” H.E.R. said. “The world will see a Black and Filipino Belle! I have always wanted to be a Disney princess, and I get to work with two wonderful directors Hamish Hamilton and my favorite, Jon M. Chu. It is very surreal and I couldn’t be more grateful.”

H.E.R. recently won the Academy Award for Best Original Song for her work on “Fight For You” from Judas and the Black Messiah (2021) and has won five Grammy Awards across her career thus far.

“With her obvious extraordinary talent and stage presence, H.E.R. is the perfect embodiment of our Belle and we are thrilled for audiences to see her in this celebration of creativity,” said Chu. “We were both influenced as storytellers by the original animated movie, so it’s very exciting to collaborate together to honor the artistry of that timeless classic while also inspiring a whole new generation of creators.”

Beauty and the Beast will be performed in front of a live audience but will not be shot live. It airs this winter.

The Walt Disney Company’s diversity and inclusion efforts are notable and can be seen across its massive portfolio. The choice to cast H.E.R. — a Black Filipino woman — in this role as Belle, shows that the Mouse House is not tied to previous incarnations of its characters.  This can also be seen in Disney’s casting of Halle Bailey in next year’s live-action remake of The Little Mermaid (2023), where Bailey takes on the role of the mermaid, Ariel, in director Rob Marshall’s upcoming movie.

As for the future of Beauty and the Beast, a small screen prequel called Little Town starring Luke Evans (Gaston) and Josh Gad (LeFou) was in production but was halted indefinitely earlier this year. Its future is unknown.

Beauty and the Beast: A 30th Celebration is produced by Done+Dusted in association with Walt Disney Television Alternative and Electric Somewhere.

What do you think of H.E.R.’s casting as Belle? Let us know in the comments down below!