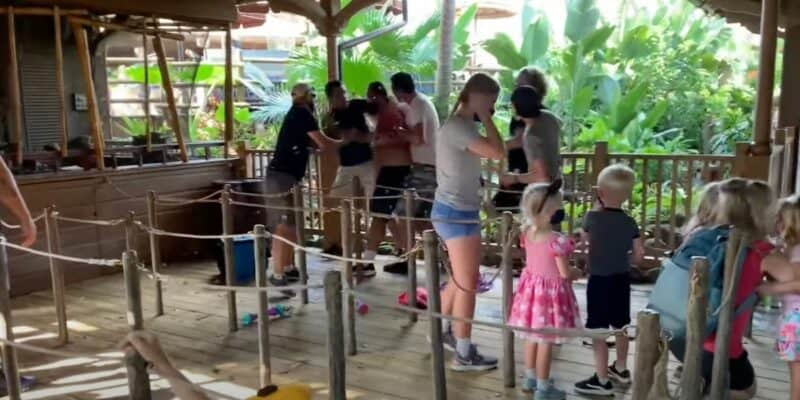 When Guests are at Walt Disney World, there is a certain level of behavior that they must maintain while they are there.

Since Walt Disney World Resort is on private property, Disney has the ability to make their own rules and regulations. This means that if Guests are breaking Disney’s rules, Disney can escort them out of the Park, call the police, and even ban them from property for life. We have seen all of these consequences come into action in the past, and now, another video has resurfaced, which once again shows Guests exactly what not to do while at Disney.

We know that a Disney vacation can get stressful. The trip is costly, crowds can be intense, lines can be long, and the Florida heat can make almost anyone lose their temper like the Beast if prodded enough. That being said, even if you are at your wit’s end, there is no excuse to break out into a physical altercation at any of the theme parks.

Tom Johnson posted a video of a fight breaking out at Disney’s Jungle Cruise attraction in Magic Kingdom. This altercation broke out towards the beginning of the pandemic and was posted in November 2020. The video describes the altercation in the description:

A guy was not following physical distancing guidelines and ended up starting a fight with a couple that asked for him to stop and tried to allow the guy in front of him. The guy had two little girls with him. The guy in the video who gets his shirt ripped off was at fault and started the fight.

In the description, it seems Tom noted that the Guest in the red shirt was at fault, however, due to the short and loud nature of the video we cannot tell exactly what is going on. Regardless of why the fight broke out, it caused a massive scene and left children feeling that they had to move away for their safety, as we can see in the video as the fight goes on, which is another violation of the rules and regulations set out by the Walt Disney Company. We do not know what resulted in the fight with the Guests who were involved, but it is likely that some sort of consequence would have been instated.

We have seen Guests use vulgar language, which left them banned for life, as well as Guests sharing backstage photos and posting unsafe actions online, which resulted in the same. All of these actions not only will have serious consequences but will affect the trips of those around you. So please, be sure to always follow the rules at Disney and respect those around you, including the Cast Members who have been working so hard during the pandemic.

Disney describes the attraction as:

Adventure Around Every Corner
Embark on a river cruise where dangerous beasts and dry wit abound. Board a canopied tramp steamer piloted by your trusty skipper, who will expertly navigate you through some of the world’s most treacherous waters.

Steam past lush foliage, butterflies and waterfalls on the Amazon in South America. Glimpse an abandoned camp overrun by curious gorillas on the shores of the African Congo.

Watch for angry hippos, hungry lions and “sleeping” zebras along the Nile and be on the lookout for a missing Jungle Cruise vessel and its helpless passengers. As the cruise continues down the Mekong River, you just might learn that the jungle always gets the last laugh.

What do you think of this unfortunate altercation? Let us know in the comments below.