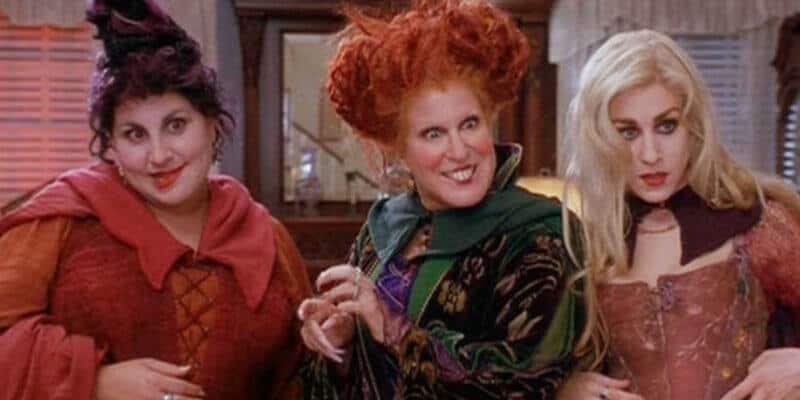 In just a matter of months, the Sanderson Sisters will return in an all-new full-length feature film.

However, it seems that one Hocus Pocus star is under fire for recent comments made on Twitter.

Bette Midler, who plays Winnie (Winifred Sanderson) in the beloved cult-classic, recently shared thoughts on the recent baby formula shortage when MSNBC Anchor Stephanie Ruhle shared some facts about the control of the production by just three American companies.

Of course, the tweet from the Sanderson sister received thousands of replies– mostly in backlash– over the comments from users who called her comments “inappropriate” and “disappointing.”

Extremely, profoundly even, disappointed that you’re taking this line. Yes, the monopolies are real and @Nestle in particular has had evil practices. But that doesn’t mean that breast-only (or even at all) is doable for many many women:

Extremely, profoundly even, disappointed that you're taking this line. Yes, the monopolies are real and @Nestle in particular has had evil practices. But that doesn't mean that breast-only (or even at all) is doable for many many women: https://t.co/Bzozt62yB6

Surely you don’t think every single woman can produce on demand, right? That is absolutely ridiculous & so insensitive to women who cannot.

Surely you don’t think every single woman can produce on demand, right? That is absolutely ridiculous & so insensitive to women who cannot. https://t.co/qZqdNMAE61

Disney previously announced that the beloved Hocus Pocus (1993) would be getting a sequel with Bette Midler (Winnie), Kathy Najimy (Mary), and Sarah Jessica Parker (Sarah) all returning to reprise their roles as the Sanderson Sisters, the witches of Salem.

It’s been nearly two years since the original announcement from Disney that the movie would include not just a star-studded cast, but also a top-notch production team with scripts from Jen D’Angelo (Workaholics) and producers Lynn Harris (King Richard), executive producer Adam Shankman (Disney’s Disenchanted), and crew from the first installment, Ralph Winter (Hocus Pocus), and David Kirschner (Hocus Pocus), serving as executive producer.

While there has not been an official release date, the expectation is that the film will debut on Disney+ in fall of 2022, and many have pegged October 14, 2022 as the date the movie will be released.

In addition to the Sanderson Sisters, we can also expect recent Emmy winner Hannah Waddingham (Ted Lasso, Game of Thrones) to be involved in an unknown capacity, and Doug Jones (The Shape of Water, What We Do in the Shadows) to be a part of the Hocus Pocus 2 cast as the undead zombie and Winnie’s ex-lover, Billy Butcherson.

According to a previous press release from Disney+, Whitney Peak (Gossip Girl, Molly’s Game) as Becca, Lilia Buckingham (Dirt, Crown Lake) as Cassie, and Belissa Escobedo (American Horror Stories, The Baker and the Beauty) as Izzy, are three young women in modern-day Salem who incite the wrath of the three child hungry witches, the beloved roles played by Bette Midler, Kathy Najimy, and Sarah Jessica Parker.

It’s been 29 years since someone lit the Black Flame Candle and resurrected the 17th-century sisters who were executed for practicing witchcraft, and they are looking for revenge. Now it is up to three high-school students to figure out how to stop the ravenous witches from wreaking a new kind of havoc on Salem before midnight on All Hallow’s Eve.

What do you think of Bette Midler’s comments? Let us know in the comments.