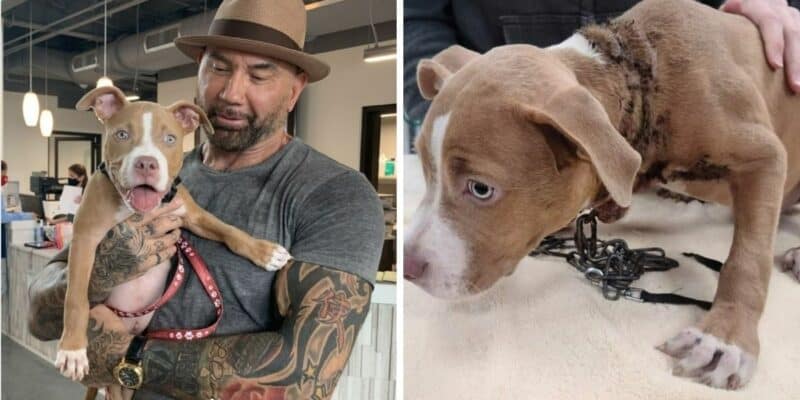 Dave Bautista who you may know as playing Drax in Marvel’s Guardians of the Galaxy has recently shown that he is a hero both on and off-screen!

Rescuing a puppy who was severely neglected and abused, and offering a reward for anyone who finds the person responsible, here is the touching story of Dave Bautista and his new puppy named Penny.

An Instagram post shared by Fox 13 News shared the details of how Dave Bautista rescued a severely neglected puppy:

LOVE THIS! After a good Samaritan found the 3-month-old puppy with a metal chain deeply embedded in her neck, Marvel actor and WWE legend @DaveBautista offered $5,000 to find whoever was responsible. But then he went even further — he adopted the pup from the @humanesocietytampabay. And it’s not the first time he’s rescued dogs from a Tampa shelter! ❤

Fox 13 News continued stating that Bautista donation encouraged others in the community to also donate:

Bautista, best known for portraying Drax the Destroyer in the “Guardians of the Galaxy” and “Avengers” movies, saw the shelter’s post about Sage and shared it on his social media pages, causing her story to go viral.

The actor even offered a $5,000 reward to anyone who would come forward to name the person who abused and neglected the dog. He later said the total reward went up to $11,500 after Alvarez Injury Law Firm matched his reward, while the Humane Society offered $1,500.

The Humane Society received a flood of inquiries from people wanting to adopt Sage, but ultimately Bautista decided he wanted to adopt the tiny pup himself.

“Sage, now known as Penny, now has her very own superhero and will never know pain/suffering ever again,” the shelter said.

You can check out what Dave had to say about this on his personal Instagram:

Sage was horribly abused and left for dead. Here’s her update. Thanks from the bottom of my #DreamChaser heart to @safek9 @humanesocietytampabay and @alvarezinjurylawpllc 🙏🏼

Dave Bautista is a Florida local, and this is not the first time he has offered a monetary sum to catch criminals who abuse animals!

Previously we reported that Bautista offered $20,000 for anyone who caught a criminal that had scrapped “TRUMP” onto a manatee. Manatees are protected under the Endangered Species Act. You can read more about that story here.

Let us know what you think about Dave Bautista’s new adorable rescue puppy in the comments!