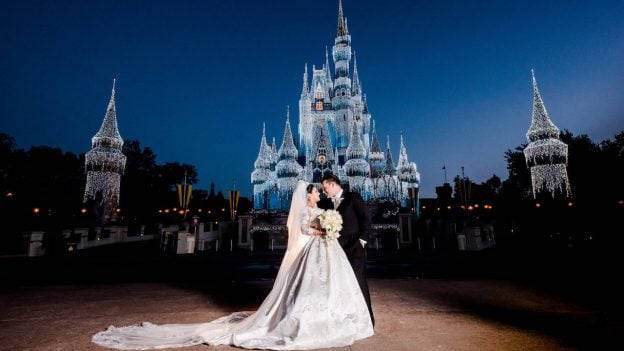 For many Disney fans, one of the biggest bucket list items is to get married on Disney World property.

Disney World has so many different locations that Guests can get married. Disney’s Wedding Pavilion is iconic at Disney’s Grand Floridian Resort and Spa with views of Cinderella Castle, or Guests can venture off to Cinderella Castle in Magic Kingdom to have their dream ceremony there. In EPCOT, all of the pavilions can be transformed into a wedding dream, with Italy being one of the most commonly used. Other Resorts like the new Gran Destino Tower also have lovely grounds that are used for weddings. Plus, you can then customize everything! You can save money and go low-key, or you can invite Mickey Mouse and Minnie Mouse, arrive in Cinderella’s carriage, have a live band, fireworks, and more. Of course, this all depends on how much you want to spend.

Even the cheapest of Disney weddings will be costly, and one bride who has been through it all is now talking about what couples should know before agreeing to have their dream wedding at Disney. Insider recently published a piece by Mystee Ipong, who had her dream Disney wedding. Although there seem to be no regrets on her part, there were a lot of surprises and things she did not know about the process in planning your very own Disney Fairytale Wedding, and aspects that she found rather complicated.

Ipong had quite the Disney wedding for her $25,000 budget!

We had our welcome dinner at Tamu Tamu in Animal Kingdom, which transported our guests to another corner of the world. We then had a picturesque wedding in the Italy pavilion at Epcot and reception at Sea Breeze Point at the BoardWalk, which gave us a feeling of being lakeside. For our dessert party, we chose Whitehall Patio at the Grand Floridian, which transformed our night with swinging jazz.

From this, we can see that her Guests truly were jumping around the property, in which Ipong noted she wished she paid for private transportation for them as it was a lot of commuting. Another thing our bride was unaware of is that there are event minimums for each aspect of your wedding.

Your main event minimum is calculated by your ceremony and reception locations. As you can imagine, getting married at the castle has a much larger minimum. Additionally, getting married on a weekday instead of a weekend can lower the minimum.

For example, we got married in Epcot’s Italy Isola on a Tuesday, and our minimum was $7,000.

But your reception venue may come with a food-and-beverage minimum as well. Ours was $1,000, which we had to spend on food, alcohol, and cake.

Brunch, lunch, and dinner options also come with different per-person minimums. We threw a brunch, and we had to spend $140 a person on food and alcohol.

She also noted all of the fun things you can add in to make the day more magical! Steamboat Mickey showed up to their wedding, which was fun for Guests, but what was even cooler was the ride mix-in! The Guests of the wedding got to go into Disney’s Animal Kingdom and cut to the front of Flight of Passage in Pandora for a midday ride!

Another thing she brought up was having a backup rain location. In Florida, rain is a very common occurrence, especially depending on the month in question so being prepared for inclement weather is always important.

For example, the backup for Cinderella Castle is the Wedding Pavilion, which is breathtaking, but you still have to pay the much higher rental fee for the castle.

Ipong also noted that the Guest experience will always take priority over your wedding. This means getting married before or after the Park has already shut down in most cases. Weddings can be planned 16 months out, which may feel like short notice for some couples and it seemed that Guests will need more help navigating where to go and what to do a lot more than usual, so that is something that should be prepared for beforehand.

Overall, it seems that a Disney wedding is not something Ipong has any regrets about, but rather, just the things that other couples should be aware of before planning their Disney dream wedding!

The newest line of Disney princess wedding dresses is now out! You can check that out here.

At Magic Kingdom there is so much to see and do! Cinderella Castle is decked out for the 50th anniversary and soon Festival of Fantasy and Mickey’s Royal Friendship Faire will return. You can ride the three big mountains: Space Mountain, Splash Mountain, and Big Thunder Mountain, or calm things down on Peter Pan’s Flight. Rope drop the Park to get on Seven Dwarfs Mine Train and then enjoy a mid-day snack with some Dole Whip. Be sure to meet Mickey Mouse and enjoy the firework show, Disney Enchantment!